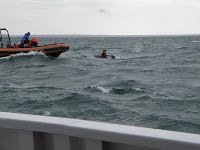 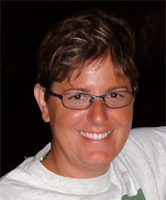 With gale warnings in effect and the east coast battening down for a big storm in Force 7-8 conditions, Claudia Rose blazed another open water swimming trail across Buzzard’s Bay in Massachusetts on the east coast of the USA.

The traditionally choppy bay has apparently never been crossed until Claudia accepted the challenge presented to her by her father.

Claudia started from Chapoquoit Beach in Falmouth, Massachusetts and took a slightly curving course to allow for the tidal flow and winds to Angelica Point in Mattapoisett. Her course measured 9 miles and took her 4 hours and 53 minutes.

“Navigating in the wind, swell and chop proved was challenging and the most difficult part of the swim,” explained Claudia as she was guided by an experienced crew from the Massachusetts Maritime Academy. “The southeasterly winds began blowing at 25-30 knots with the occasional 40-knot gusts caused me to tumble in the breaking swells and chop. I could not see Mattapoisett from the water until very near the finish.”

“I finished my swim in conditions that at times were so scary I was happy I couldn’t see, I thought it was raining but it was just the tops of the waves being blown off. If I didn’t have such incredibly experienced mariners it would not have worked.”

Claudia’s effort was a charity swim for chronic pain research by the Reflex Sympathetic Dystrophy Association.