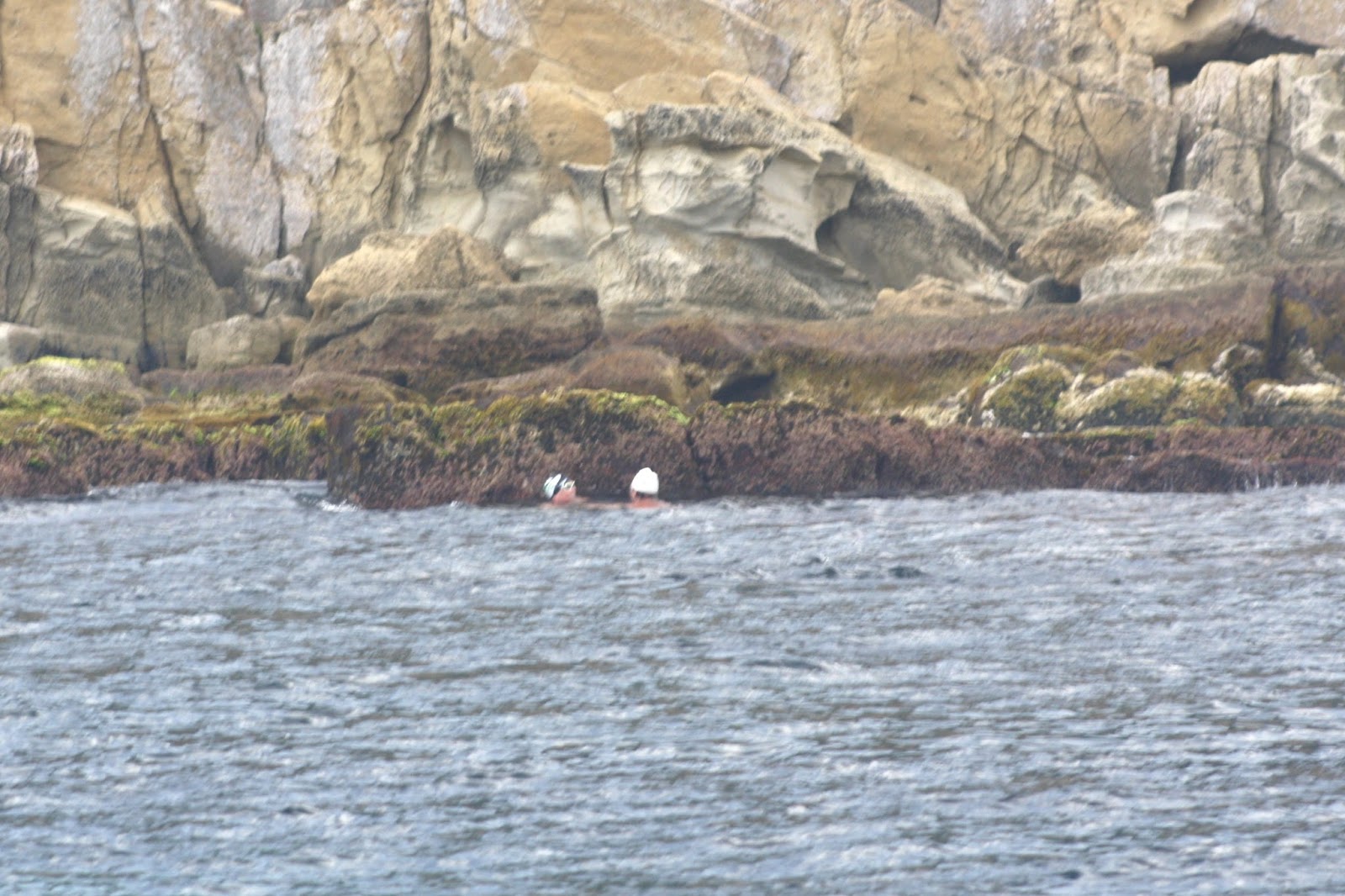 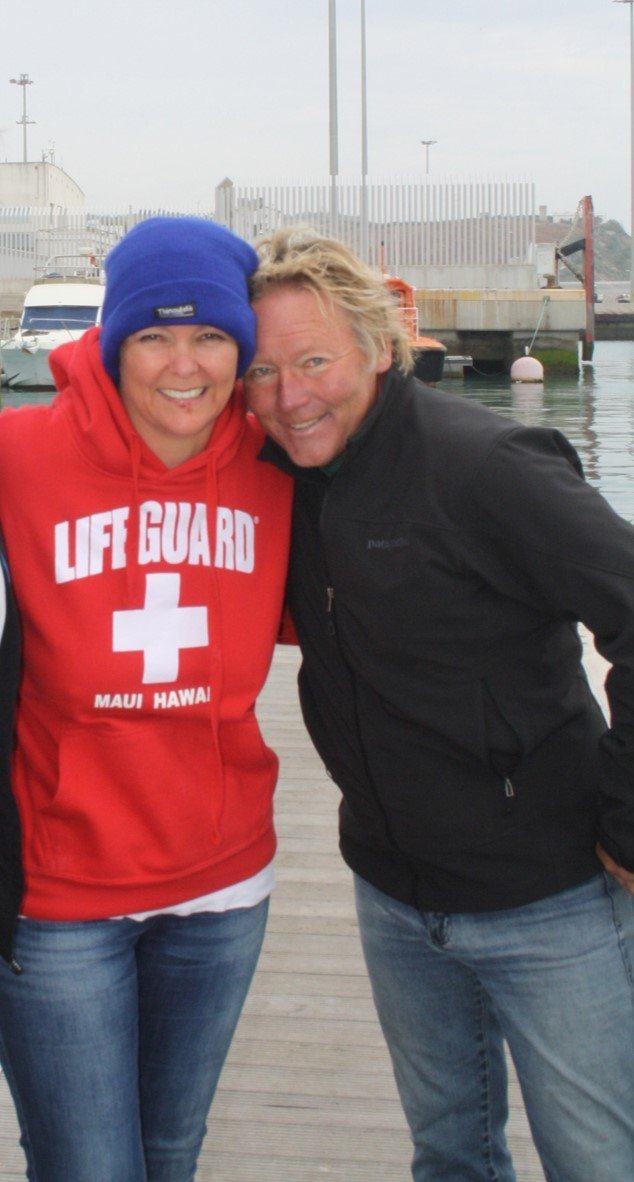 Courtesy of New Zealand’s Tracy Clark from the Strait of Gibraltar.

Last week Roger Finch from South Africa and I swam the Strait of Gibraltar. It was not the best day in the water for me that’s for sure. We had been let down badly by someone days before the swim which in turn caused a lot of anxiety in the days leading up to the swim and certainly during the swim. To go into any challenge with an uneasy and restless mind is far from ideal.

Two days before leaving for Dover back in 2013 for my English Channel swim, I met up with my coach and friend Irene van der Laan. She impressed upon me the importance of the mind. The mental aspect at this stage is more important than the physical. Your training has been done (or should have been done) by this stage. Your mind is what will, or won’t, get you through, were her wise words.

Arriving at the harbour of Tarifa at 6:30 am on June 9th, it appeared we had a beautiful day with calm seas. Rafael Gutiérrez Mesa, the Strait of Gibraltar swim organiser, had said days before in the briefing – the ideal day would be to have a back wind to help us over the infamous currents of the Strait. We didn’t have this. However, we were grateful to just get an attempt underway.

So many swimmers come to Tarifa and wait and wait for the famous Levante east wind from the Mediterranean to drop, and walk away without the chance to even make an attempt.

We set off on the main boat Columba to the Island and lighthouse of Tarifa. Time to jump in at 6:57 am. We swam ashore, touched Spain for the last time for several hours and started to do what we had set out to do, swim to Africa which sounds more exotic than Morocco.

Within ten minutes, we swam into a shoal of small purple jellyfish known as Pelagia Noctiluca. Wow, they HURT!!! We both got stung which certainly woke us up. I still have lesions on my shoulder, armpit and several behind the ear and down my neck as I was turning to breathe as we swam into them. We found our rhythm again and all seemed to be going well. The sun was coming up and we were swimming in a nice synchronicity, breathing facing each other and smiling.

We stopped to feed at the one-hour mark. All was good at that point. However, by the next ½-hour feed, I had started to shake inside and out. I was so confused by this as I have swum outside in the Netherlands right throughout the winter in only a swim costume and completed an ice mile in 3.5°C water. The water was a warm 17°C. I said to Roger, ‘Something’s wrong, I’m shaking inside and out.’ He replied, ‘You’re doing great, just stick with me and we’ll be fine.’

So, stick to him is exactly what I did. By the next ½-hour feed, my legs had begun to cramp up through the calves and quads. This never happens. From this point on the swim became an upper body workout as my legs were completely useless. Getting across the oncoming currents at various points were so tough, but with the encouragement to dig as deep as I could at each feed, spurred me on.

I was so engrossed in getting the job done that I didn’t pay too much notice to the ships passing us. I was vaguely aware of vessels the size of the Dutch village I live in, crossing our swim path. I just needed to keep my head down and keep moving as I was not feeling great.

After just over six hours, we finally saw rocks on the bottom. Roger had swum over to the pilot boat for a last drink and I just kept swimming – the end was in sight. I reached the rocks of the Moroccan coastline about a minute before him. The boat pilot was yelling at me to ‘touch, touch’! I yelled back at him, ‘No way, not without my friend.’ Roger swam up and said ‘Have you touched’? I said ‘No way, not without you.’ How rude would it be if I touched first after all he had done for me during the swim. With that, we touched the rocks together in a time of 6 hours 20 minutes.

I felt so emotional. Physically, it was a lot easier than the English Channel, but mentally it had been incredibly tough for me. We swam back to the inflatable boat and they hauled me up onto the side – backside in the air. I heard the distinctive laugh of Roger behind me, which really broke the sombre mood. I’m pleased he didn’t have his usual accessory of his waterproof camera close to hand.

Upon returning to our accommodation, I sat on our terrace overlooking the Strait of Gibraltar right across to Morocco. I felt a mix of relief, anxiety because of my troubled mind….and only a dash of pride, which surely should be first and foremost after accomplishing any channel swim? After all, isn’t the sport of crossing channels only about reaching the other side, the goal, the end point and not about time?

Breaking into my thoughts, Roger came and sat down beside me and asked me how I was. I shared my thoughts with him in a brutally honest way on the verge of tears. He looked me in the eye and said to me, ‘Hey, it’s the tough swims we should be proudest of. The swims where we have to dig deep and I saw how tough that was for you and how deep you had to dig. Did we make it – yes. Did we swim to Morocco – Yes. So be proud, be very proud of yourself because I am.’

Now this did make me cry. As it was mid-afternoon by that point, he jumped up and came back with two beers to cheers our accomplishment.

Reflecting back on this swim a week later, there are a few things I want to say. Number one is, thank you Roger Finch for sticking with me, believing in me, and never giving up on me – how could I have touched Morocco before you after all you had done for me.

I will never go into another swim with an uneasy mind. The effects could have been devastating on the swim especially the physical effects this brought about.

Am I proud of this swim – yes. After all – we just swam the Strait of Gibraltar, and that’s all that counts.

* Footnote from Roger Finch: Tracy Clark received the 2013 Award from the Channel Swimming Association for her Solo English Channel Crossing in the Most Arduous Conditions (12 hours 46 minutes). The last three hours of her English Channel swim was completed in force 6 winds during the night. Tracy is no ordinary swimmer, an extremely determined and tough swimmer which once again highlights that the mental state is the key to any challenging ocean crossing. Without it the body will certainly struggle. Further proof of the importance of mental toughness.