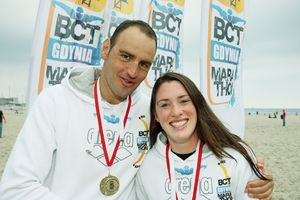 Mikołaj Nałęcz- Nieniewski and Tomasz Pąchalski announced the 19.5 km BCT Gdynia Marathon which will be held in Gdynia (Poland) on August 23-25, 2013.

The contestants will swim 19.5 km from the Hel Peninsula to a beach of the City of Gdynia and compete for a total cash prize of US$ 28,000, including two checks for US$10,000 for the overall female and male winners.

BCT Gdynia Marathon brings back the history of open water swimming in Poland.

The tradition of open water swimming marathons in Poland began in the 1960’s and early 1970’s in the waters of the Bay of Gdansk. In 2011, the inaugural edition was held with 50 swimmers competing in a 3.5 km course. In 2012, professional marathon swimmers Petar Stoychev and Christine Jennings won. This year will prove to be the largest event to date.

“Specifics of the basin and a distance of nearly 20 kilometres makes the competition one of the most difficult ones held in Europe. Consequently, we have only invited the best swimmers of the world to take part in it. Total prize pool amounts to US$28,000,” says Dagmara Łuczka, press spokesperson for BCT Gdynia Marathon. “We are convinced that the third edition of BCT Gdynia Marathon will contribute to the promotion of the city and to the popularisation of long distance swimming in open waters. We do hope that during those three days we will succeed in getting all aquatic sports lovers focus on the host city of the event – Gdynia, and in involving city inhabitants and tourists in joint fun, says Krzysztof Szymborski, President of title sponsor Baltic Container Terminal.

In addition to the 19.3 km marathon swim, there will also be an open amateur race of 2.9 km and a 4x200m relay race on August 25th. For more information, visit here.