Be The First – Now Is The Time In The Open Water 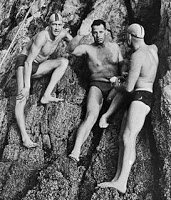 The world is a very large place. Mountains have been climbed and many run, bike and ski all over the Planet Earth.

But there are many more lakes, rivers, bays, islands and waterways of all types to conquer for open water swimmers and aquatic adventurers.

Become part of history. Be a trailblazer. Set a record.

You can be the first person to cross your own channel. The possibilities of becoming the first one to swim a certain course is nearly endless. Your solo swim – or relay or stage swim – does not have to be a marathon distance. It can be in a local lake or around a peninsula. It can be a island circumnavigation or a river swim downstream – or upstream.

Document it by filming it, accurately measuring it (via GPS), and arranging for an independent observer to certify your swim. Write out it. Photograph it. Memorialize it for history.

Be the first. Be a part of history. Now is your time.