Bear With The Aquatic Denizens Of Open Water 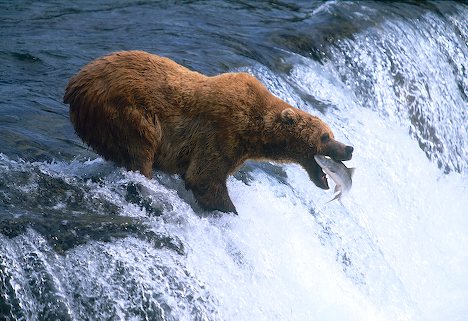 But as more and more swimmers take to the open water, there are an increasing amount of reported encounters with wild life. In the states of Washington and Alaska in the U.S. and Canada, some swimmers and their coaches are taking countermeasures in order to protect themselves against orcas (or killer whales).

And now certain populations of open water swimmers may have to implement additional safety measures due to swimming grizzly bears, tracked in Flathead Lake in the state of Montana.

A young grizzly bear had been tagged with a satellite collar and tracked by GPS data. “We thought that because we don’t have bears very often on the west side of Flathead Lake that we would put a collar on [the 4-year-old grizzly],” explained Rick Mace, a research biologist with Montana Fish, Wildlife and Parks to Daily Inter Lake.

According to the GPS data, the bear swam from Painted Rocks point to Cedar Island, where she spent a day. Then she swam 3 miles to Wild Horse Island, where she wandered around for three days before swimming another mile to Polson Bay. After several days there, she embarked on a 7-mile crossing to Flathead Lake’s east shore. “She spent a minimum of eight hours in the water swimming [during that crossing], probably closer to 12 hours if you put it all together,” said Rick, who calculated the bear’s time in the water from coordinates recorded in four-hour intervals on the satellite collar.

“This [bear] stands out. Every bear is kind of cool when you look at the nooks and crannies where they’ve gone, but this is the first one that’s done something like this.”

Rick knows of other male grizzly bears that have swum across Hungry Horse Reservoir or on Lake McDonald, but nothing approaching the distances this female bear swam on Flathead Lake.