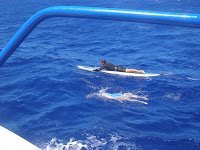 The raw beauty of the Penny Palfrey’s Kaieiewaho Channel attempt, 115 km between the islands of Oahu and Kauai in Hawaii is…indescribable gorgeous. 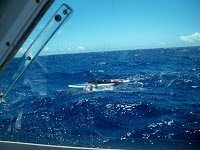 Jeff Kozlovich, one of her paddlers, took some outstanding video of Penny swimming at an furious pace for over 12 hours.

Averaging 77 strokes per minute for over 12 hours, Penny was feeding well, feeling good and on her way to an estimated sub-30 hour crossing, when tiny little creatures injected too much venom in her to continue.

So blue, so powerful…enjoy one of today’s modern aquatic heroines safely and professionally guided by an escort team that took every advantage of the elements: