Before There Was In Search Of Memphre 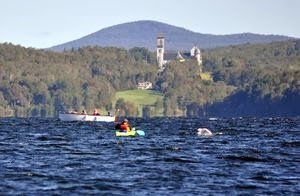 When Phil White created the In Search of Memphre race from Newport, Vermont in the United States to Magog, Quebec in Canada, he revived an old professional marathon swim.

The Traversée Internationale du lac Memphrémagog, one of the great races on the FINA Open Water Swimming Grand Prix circuit, has a long, proud history in enabling swimmers to traverse between America and Canada.

The race, which used to start in the city of Newport in the state of Vermont and head 34 km due north across the American-Canadian border to finish in Magog, Canada, is now one large out-and-back course held solely inside Quebec.

The former cross-border swim has occasionally created an unusual situation for the swimmers. Before the 2003 race, professional marathon swimmer Mohammed Hassan from Egypt had taken three months to obtain a visa to enter the U.S. for the competition.

But, the Department of Homeland Security told Hassan that his name was on an FBI list. Because of this, Hassan was not be allowed to swim out of the United States and into Canada, but he could leave by any land exit point. The ruling was resolved when the Department of Homeland Security said Hassan could swim across the border as long as he agreed to report back to a U.S. border as soon as the race was over…which is what he did.

But the race was forever changed – eventually opening up the opportunity for White to create the In Search of Memphre race for amateurs and masters swimmers.