Behind The Scenes Of Baywatch With Alexandra Paul

Baywatch was one of the most popular American television shows during the 1990s. The show was syndicated worldwide and featured David Hasselhoff and openwater swimmer Alexandra Paul.

The TV series portrayed a cadre of attractive lifeguards who patrolled a crowded recreational beach and encountered all kinds of situations.

Paul recalls a number of real-life situations that intertwined themselves with the reality of filming on the beach and in the Pacific Ocean. “We were shooting a Baywatch episode in Hawaii. In the storyline, my character Stephanie swims out and rescue a drowning man. Turns out this actor did not swim very well in real life, and we were out there a long time getting shots. He got tired treading water and panicked.

The crew boat had already sped off to do other shots and we had been expected to swim to shore but he couldn’t. Luckily, I was a junior lifeguard so I really did know how to get him in. The actor swore I saved his life. I certainly saved his reputation, as I never breathed a word to anyone that he had gotten into trouble out there.

But that situation was not a solitary incident. “Everyone assumed Baywatch had stunt people do the rescues, so actors thought it was OK to lie in the audition and say they could swim. 99% of the time, however, we actors did the rescues ourselves as – also contrary to popular belief – Baywatch did not have a big budget. After the first season, when a guest star said she could swim when she could not, the casting directors made sure to be more clear about how important it was to be able to deal with the ocean. But actors are desperate to work, so they would still hedge the truth, as was the case with the actor I had to swim in Season 6.

For the physically talented former California lifeguard, this role played to her strengths. “Because I loved being in the water so much, I would beg for Stephanie to have more rescue scenes. Yasmine Bleeth, who played my sister Caroline, hated doing water work and would tell the producers to give her rescues to me. It was a running competition between David Chokachi (Cody) and me about who got more rescues.”

We asked Alexandra Paul about her years on the show: 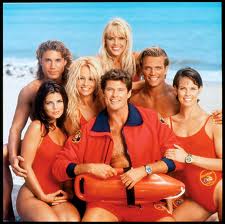 Daily News of Open Water Swimming: Where was the series filmed?
Alexandra Paul: The shows were mostly filmed at Will Rogers State Beach in Santa Monica at Temescal Canyon [in Southern California]. A set was added on to the lifeguard headquarters there, so we shot right next to the real lifeguards on duty. Their part had reflective windows so the camera could not see in.

We also sometimes shot in Long Beach and in Malibu. Several episodes of rescues were combined into one day -we would go out on a boat and film them one after another so that we did not have to deal with drying off for scenes when we are supposed to be dry.

Daily News of Open Water Swimming: Was it filmed year-round? In other words, did you have to swim in the winter months in the Pacific)?

Alexandra Paul: During my first year on the show, I was in the water December 14th shooting a sequence where I could not wear a wetsuit [when the average water temperature is 57°F (14°C)]. Luckily, Hasselhoff kept me laughing so hard it helped me stay warm. After that, the producers decided to start earlier so we could end by November. The show shot only 5 months of the year, which was very different from the network shows, which shot the same amount of episodes in 8 months. That is because Baywatch was mostly set outdoors. This meant minimal lighting set ups so we were able get through scenes quickly. We also had a joke that if the take was in focus the director would move on to the next set up, and it was pretty much true: two takes max, that was what we got. It was a no-frills operation, but the crew and cast were super professional and worked together like a well-oiled machine.

Daily News of Open Water Swimming: How did you deal with the cold?

Alexandra Paul: With a smile. Not a single actor ever complained. There was a rule that actors could not wear jackets in scenes unless our character was coming to or leaving work. They wanted us in bathing suits as much as possible. Which meant that sometimes it was cold in and out of the water. Actors were expected to be camera ready as soon as it got light enough outside so it was often chilly on the beach, but actors are used to being in all sorts of weather. I was just grateful there were never any night shoots. Those are really hard on me, filming from 7 pm to 7 am. Give me a cold ocean any day! The crew was so expert at keeping us warm when we got out of the water, that it was never a problem. My first year being in the Santa Monica Bay I got a really bad cough, but it boosted my immune system against the pollution for the rest of my seasons on the show. The year after I left the show, I started training for an Ironman, so I swam in that water even more often.

Daily News of Open Water Swimming: Did you encounter any marine life (e.g., stings from jellyfish, sighting of sharks, encounters with dolphins)?

Alexandra Paul: Nothing dangerous – mostly amazing times on the ocean filming and yes dolphins. In the scene where my character’s dead body is being transported by canoe to shore, dolphins joined us in the scene, that was cool. One time the rains mucked up the water quality, so we had to move down to Long Beach, but there was so much styrofoam floating on the water there, we had to cancel the whole day. It was just styrofoam everywhere, very scary. My friend John Nelson was shooting some scenes down there and he had to out-swim a sewage spill. Nicole Eggert and I found a body with a gunshot wound washed ashore on the beach. That was weird.

Daily News of Open Water Swimming: Did you train by swimming or do anything special to keep in shape for this role?

Alexandra Paul: I kept in shape by going to Gold’s Gym in Venice every morning at 4 am – doing an hour of cardio and maybe weights – so I could be on the set by 6 am. Hasselhoff also got up early to work out. He is very disciplined.

Daily News of Open Water Swimming: Did you wear a special swimsuit?

Alexandra Paul: After my first season, the producers realized the suit was not really made for my body type, and they allowed me to wear a different style of red suit, more athletic looking and with less cleavage. Then they began finding styles that fit each woman best.

Daily News of Open Water Swimming: Why were you selected for this role? How did you get the job? You obviously demonstrated your swimming prowess at some point.

Alexandra Paul: I auditioned. Greg Bonann, one of the producers, swam at the same pool as I and had heard that I was a good swimmer, so he called me in. I auditioned for the parts Pamela Anderson and Nicole Eggert eventually got. I was not right for either role obviously, so the producers decided to write a part for me, which was nice. They liked me because I was tall and athletic. Hasselhoff is very tall and they thought I would make a good girlfriend for him. I got to choose my character’s name and her personality. Holden was the last name of my math teacher in high school and he was a type A, competitive person who was slightly intimidating and very passionate about his job, so I thought it was apt, since Stephanie Holden was that way. I was at a time in my life when I wanted to work on playing a strong character, not a nice girl next door like I had been doing for 10 years, so I requested she have an edge.