Being With Bengals, Terrifying Tigers In The Tank 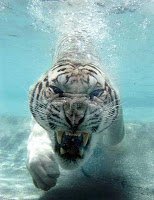 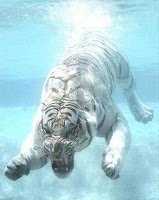 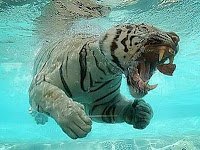 While sharks are usually the marine creatures that most strike fear in the hearts of open water swimmers, it is jellyfish that are usually the things that create pain and discomfort among swimmers who unfortunately find themselves in a jellyfish encounter.

But there are several other creatures that not only strike fear in open water swimmers, but that are downright dangerous depending on whether swimmers find themselves in lakes in Africa or above the Arctic Circle (see here). These denizens of the deep (and the shallows) include:

1. Polar Bear: They can be extremely dangerous and are one of the few animal species that will hunt a human. They can move very quickly.

2. Nile Crocodile: They are patient and are ambush predators. It is difficult to see them – because most rivers and lakes are murky. Not many people survive a crocodile attack.

3. Hippopotamus: They kill more people in Africa than any other animal, other than the mosquito (malaria). A bite from a hippo is a serious wound.

4. Leopard seal: They have razor sharp teeth and bark a blood-curdling hiss when swimmers get near. One moment they will kill a penguin and drop it in front of a swimmer as a gift. The next moment they are trying to bite human legs.

6. Box Jellyfish: Some species are among the most venomous creatures in the world and are found off the Australian coast, but they are invading other waters around the world. A sting can be fatal.

7. Orcas or killer whales: They can handle themselves well against the Great White Shark. Enough said.

8. Sea snakes: Air-breathing aquatic snakes have some of the most potent venom of all snakes. Some have gentle dispositions and bite only when provoked, but others are much more aggressive and teeth may remain in the wound.

9. Needlefish: These slender fish have long, narrow jaws filled with multiple sharp teeth and can jump out of the water at high speeds over the decks of shallow boats, especially when attracted by light at night.

10. Piranha: Known for their sharp teeth and a voracious appetite for meat, the total number of piranha species is unknown with estimates ranging from fewer than 30 to more than 60.

But there is a special mention: the bengal tiger. Photographed swimming in an aquarium, they are good swimmers, especially when going after a meal.