The Beltquerung Between Denmark And Germany 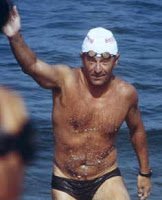 Sergio Salomone explains about one of the world’s most challenging channel swims: the 25 km Beltquerung.

The 25 km channel swim is in cool waters (16°C) of the Fehmarn Belt (Danish: Femern Bælt, German: Fehmarnbelt), a strait in the western part of the Baltic Sea between the German island of Fehmarn and the Danish island of Lolland.

After the first unprecedented crossing in 1939 by local swimming pioneer Karl-Heinz Rauert, the top ten swimmers who have traversed between Rødby in Denmark and Puttgarden, Germany include the following channel swimmers: