On June 12th, Ben Lecomte and his escort crew of nine  left Oahu, Hawaii towards the Great Pacific Garbage Patch.

He explains The Vortex Swim that started on June 17th, “The last few months were jam packed with expedition preparations: fixing our main sail, getting some minor and bigger jobs on the boat done, choosing a few new crew members and sending all of our research materials collected so far out to our partners and researchers all over the globe.” 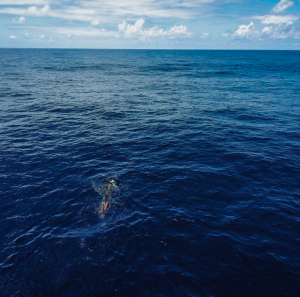 Now Lecomte has now completed 18 days into his solo stage swim expedition and swam passed the 50 nm (92.6 km) mark.  “It was the best day of swimming yet, with very calm seas.  This is a great milestone to reach, but I still have 250 nm (463 km) left to swim.  Our whole team has so much more to research and learn on this incredible expedition through the Great Pacific Garbage Patch.” On July 1st, his crew of researchers and scientists found their highest count of microplastics in a 30-minute net tow. 118 fragments were found in the net.  They do two net tows per day and, so far, everyday plastics have found their way into the nets. One of the most common discussions Lecomte and his crew have on their escort boat is about what they should do with large debris.  Lecomte says, “Most of the plastic we find has life growing on it and fish using it as shelter. The questions is: Do we leave it to save those animals now? Or take it to stop it from breaking up into smaller and smaller fragments potentially hurting more animals in the future?”

His new Vortex Swim is a 300 nautical mile (555.6 km) solo stage swim through the highest concentration of human-made discarded plastic in the world, located in the Pacific Ocean through the Great Pacific Garbage Patch.

For updates on the progress of The Vortex Swim, visit here.

To follow daily updates by the crew, visit here.