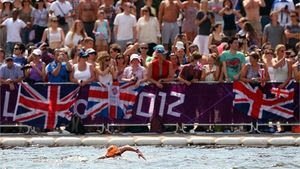 Olympic 10K Marathon Swim finalist Benjamin Schulte will be competing at the upcoming FINA World Championships in Barcelona, but he is changing his style.

Instead of 10,000 meters of freestyle in the Port of Barcelona, the young Olympian will be swimming the 50m and 100m breaststroke. With his sights set on competing for an American university next year, he is set to showcase his best in the pool.

“I am focusing on pool swimming since the NCAA doesn’t run open water and lower the times I’m going to submit to schools. So at the moment I’m training for breaststroke and I’ll be swimming the breaststrokes in Spain as they’re my highest FINA points events. I’m still going to keep my foot in open water, though, that’s for sure.”

We are hopeful that before Schulte graduates from an American university, the NCAA will add open water to its championship events. The sport of triathlon currently looks to be on its way to be added to the NCAA schedule and open water should not be far behind.

For a bit of background and prognosticating on open water swimming at the NCAA level, read these two commentaries: Why The NCAA Should Add Open Water Swimming and It Is Only A Matter Of Time For Triathlons And Open Water.