Benjamin Franklin Advocated Universal Learn To Swim For All 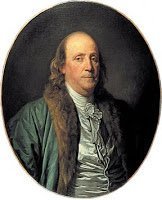 Benjamin Franklin, one of the Founding Fathers of the United States of America and a leading author, printer, satirist, political theorist, politician, scientist, diplomat and statesman of his day, is lesser known as an Honour Swimmer in the International Marathon Swimming Hall of Fame and Honor Contributor in the International Swimming Hall of Fame.

As a teenager, Franklin had no fear of the waters of Boston Harbor where he frequented the wharves, marshes and docks.

Later, he advocated universal swim lessons for everyone, not only unheard of in his day, but also still an issue in modern times. He advocated universal learn-to-swim classes as an early proponent of physical fitness, both for peace of mind and for safety in one’s life.

In his own words, “”I had a strong inclination for the sea; living near the water, I was much in it and about it and learnt early to swim well”.”