Benjamin Freeman, All Upside In The Open Water 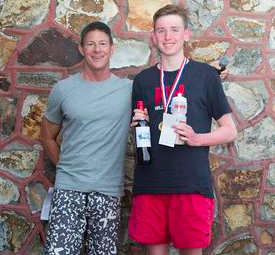 Benjamin Freeman does not waste any time.

The next year at the age of 17, he completed a fast 9 hour 10 minute crossing of the English Channel. This year, he continues his rapid pace. In June, he won the 45.8 km 20 Bridges Manhattan Swim in 6 hours 55 minutes.

On July 13th, he completed a Catalina Channel crossing from Santa Catalina Island to the Southern California mainland in a 8 hours 47 minutes.

At the age of 19, he became the fourth youngest individual to achieve the Triple Crown of Open Water Swimming [behind 16-year-old American Charlotte Samuels, 17-year-old Indian Prabhat Koli, and 18-year-old Australian Lachlan Hinds.