Bert Thomas, Strait And Tough As A Marine 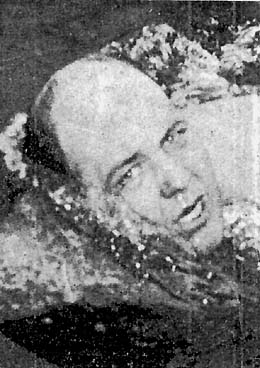 Bert Thomas was 17 years old during World War II when he joined the U.S. Marine Corps. After a tough boot camp typical of the Marines, he was sent to the Pacific theater and fought in the bloody battles in the Marshal Islands, Saipan, and Iwo Jima.

Trained and experienced in amphibious assaults, Thomas quickly learned to swim in the ocean as a native of the Rocky Mountain state of Colorado.

While stationed in Pearl Harbor on Oahu before being shipped out to war, he caught the open water swimming bug and competed in an 8-mile swim. This led his commanders to recruit him as a combat swimmer with a Marine reconnaissance battalion.

After six years in the Marines, Thomas moved to Tacoma, Washington in 1948 where he worked as a logger and longshoreman. Peacetime was welcomed, but then the itch to get back in the water came from an unexpected corner.

In 1954, he heard about the local newspaper offer of $7,500 to English Channel swimmer Florence Chadwick for her attempt to cross the Strait of Juan de Fuca and $10,000 if she was successful to swim from Canada (Victoria, British Columbia) to the USA (Port Angeles, Washington). The tough ol’ Marine, who had experienced so much during war, was intrigued. And then inspired as Chadwick retired in 47ºF (8.3ºC) water after swimming 5 miles in 5 hours 11 minutes in August 1954.

But for all his experience and motivation to swim across the international boundary between Canada and the United States, failure followed him several times before success was achieved.

Thomas was confident in his unique abilities to withstand hypothermia. He explained his mindset to The Marine Digest, “The cold [water] doesn’t bother me. It was stiffening fingers and arms that helped beat Chadwick. But the cold doesn’t affect me that way. I go into the water feet first, a little at a time. That way, it’s not such a shock to the system. The blood cools gradually. Once I get warmed up, I can keep going for hours.”

But the big bucks offered to Chadwick were not there for the retired Marine and all the others who wished to succeed where Chadwick failed. The Victoria Daily Times offered $1,000 to the first person to conquer the Strait of Juan de Fuca while local businessmen threw in $700 and the Port Angeles Chamber of Commerce added another $1,800 to sweeten the pot.

With the goal of a north-to-south crossing across the Strait, Thomas moved to the Canadian side of the strait in March 1955. Daily, he began working out in the cold, choppy water of the strait, gradually building up to 10 miles. Acclimated and inspired, Thomas thought he was ready to go in April before others beat him to the punch. But his training required more commitment than he first imagined.

In April, Thomas made his first north-to-south attempt, swimming 6 miles in 4 hours 10 minutes before being beaten by the elements. On his second north-to-south attempt in June, he was accompanied by 3 rivals who all quit earlier than Thomas who punished himself to an unsuccessful 10 hour 22 minute attempt. Thomas tried 19 days later, but he was defeated again. Relentless and pushing himself with his innate Marine mindset, he attempted again on only 3 days rest, but the tides and currents were too much on his fourth attempt.

Now it was time for mind over matter.

Instead of bucking against the inevitable, Thomas changed strategies and decided to swim in the south-to-north direction, starting in Port Angeles on the American side. With the sun on its downward arc, he started with the outgoing tide at nearly 6 pm on July 7th, 1955. Cold, as in 46ºF (7.7ºC) water, was not his primary enemy, but outfoxing the tidal flow was. On his fifth attempt and 16th attempt overall, he reached Canadian waters in a relatively quick 3 hours 15 minutes from the start. But with the sun setting and darkness settling in, his supporters built a large bonfire on the Canadian side in order to keep his escort boat on course. With his visual cue blazing brightly against the black of night, a radio station set up loudspeakers and blasted military tunes over the water in an attempt to keep the Marine motivated.

Only a mile from shore, it looked to be his day. But the tides had shifted and Thomas was fighting against the tide at 3 am in the morning. Cold and dark with the possibility of another defeat weighed heavily on his mind. But 2,000 spectators had lined the shore and watched Thomas dig deep until he reached the shore at 5:05 am to finish the 18.3-mile (29.4 km) crossing in 11 hours 10 minutes. 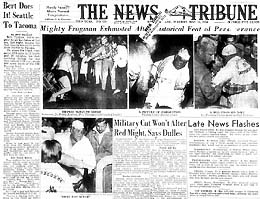 The other early crossings of the Strait include the following: