Beth French Swims Through The Night And Vog To Oahu 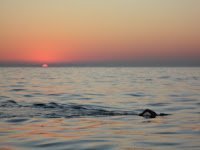 The newest member of the 24-hour Club, started at Laau Point on the island of Molokai on Sunday night and finished on Sandy Beach on the island of Oahu at 9:40 pm on Monday. Throughout the night and day and second night, French enjoyed relatively calm seas with little winds under Kona conditions under a heavy vog.

She fortunately experienced only a few Portuguese man o war stings and was able to stay fairly close to the rhumb line as the currents were not so bad.

But as sunrise came, an increasing shoulder and elbow pain were major concerns right through the finish 14 hours later.

As French got within 800 meters of Sandy Beach, the coastal movement of water was a major concern. As she started to move towards Makapu’u, Captain Matt Buckman and her crew decided to attempt to land her north of Sandy Beach. But the risks were enormous as the dangerous sharp lava rocks were her only welcome mat.

When she was stroking towards the black razor rocky shoreline between Makapu’u and Sandy Beach, two local fisherman witnessed her dilemma and came to her rescue. They advised French and crew to swim a bit further north towards an oasis among the lava rock. As the clock ticked past her 24th hour in the tropical waters under innumerable twinkling stars in the middle of the Pacific Ocean, French located the very small sandy cove where she got out without a scratch.

“Those two fishermen were her saviors,” commented Linda Kaiser. “Where she was thinking of landing would have ripped her up on the sharp rocks. Her crew was incredible. They guided, protected and coaxed her all the way. Especially with her shoulder and elbow pains, they never gave up on her and kept her going. They are all incredibly exhausted people now.”

French was filmed by Hawaiian Xtreme Sports TV for a future episode. Her efforts over a 24-hour period through the vog and with a dramatic finish on an oasis of safe sand among dangerous lava rock will be well worth seeing.