Between Molokai – Oahu Across The Channel Of Bones 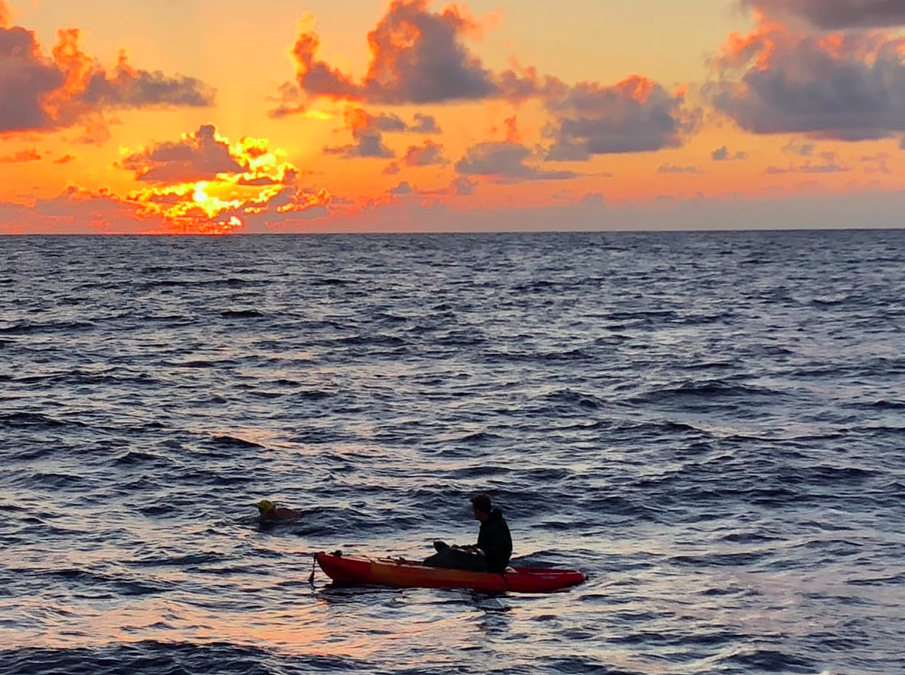 Photo above shows Lynton Mortensen on his Molokai Channel crossing in June 2018. 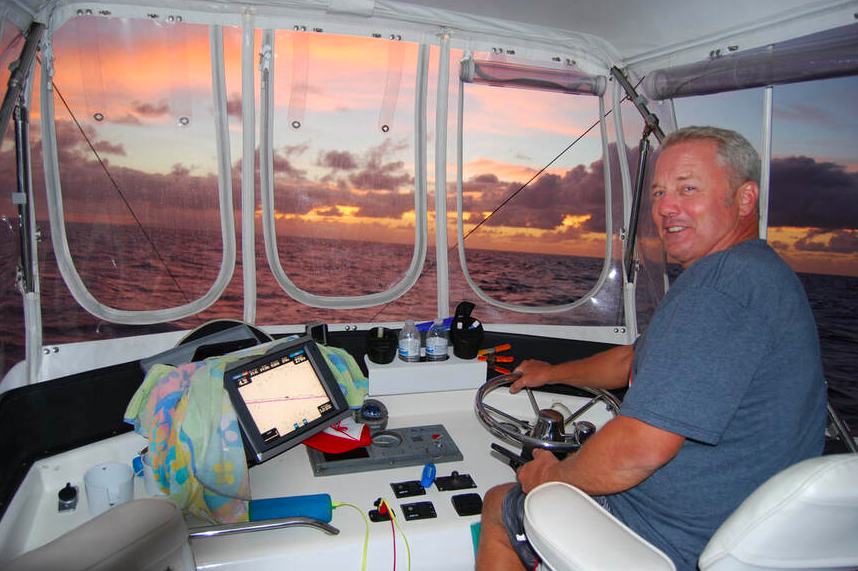 Between Molokai – Oahu Across The Channel Of Bones

Michael Twigg-Smith says, “The challenge of the Ka’iwi Channel is that it is the longest of the Oceans Seven channels, known for its wind, waves, currents and sea life.”

The experienced escort boat captain from Hilo, Hawaii should know. He has escorted swimmers and paddlers across the Molokai Channel for over 20 years with over 150 attempts and successful crossings under his helm.

He advises that all channel swimmers use shark protective devices while swimming in the Ka’iwi channel. “I am now including shark protection as part of my channel escort. This includes keeping 5 Shark Shield Freedom 7 units maintained, charged and attaching 2 of them to the kayak.

I have used Ocean Guardian Shark Shield devices on multiple swims and found them to function as advertised while the units were operational.
”

Captain Mike answers a number of questions regarding the 42 km crossing of the Ka’iwi Channel:

Q1. When is the pre-swim meeting?

Michael Twigg-Smith: It is usually held 48 – 72 hours before the swim, at the escort boat.

Q2. Where is the boat moored?

Q3. Should the swimmer stay the night before the swim on Molokai?

Michael Twigg-Smith: It is better to fly over on the day of the swim.

Q4. What are the features of your boat?

Michael Twigg-Smith: 31-foot Hawaiian Funai with toilet, 120v power (US outlets), USB outlets, running fresh and saltwater that accommodates the swimmer and up to 3 crew members. 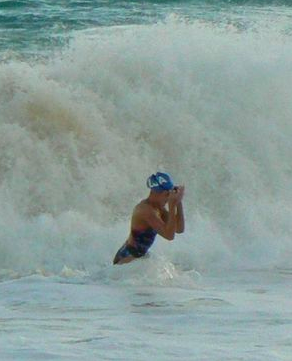 Q5. When is a good time of day to start the swim?

Michael Twigg-Smith: The swim should start so that we arrive at Sandy Beach on Oahu in daylight [see Mackenzie Miller‘s finish on Sandy Beach on left]. The shoreline is not suitable for night landings. We leave Molokai in the late afternoon to allow ample time to get to Oahu before the next sunset.

Q6. What about the surf at the start?

Michael Twigg-Smith: If there is a swell larger than 4 feet (on the Hawaiian scale) a start at Kaluakoi may not be possible. There is a secondary location for the start, but it is not preferred. Surf conditions will be assessed during daylight hours and those conditions will determine the start time and start location.

Q7. How does the swimmers crew get on the escort boat on Molokai?

Michael Twigg-Smith: All the swimmers crew must swim out to the escort boat, usually 100-200 yards offshore. The kayaker will help to load bags from the beach; it is best to have dry bags or place luggage in large plastic trash bags. Please load the majority of your gear on the boat at the pre-swim meeting.

Q8. What is the best tide to make the swim?

Michael Twigg-Smith: The best tides for this swim are mild tides. Extreme tides can cause more current in the channel. Ideally, the swimmer needs a falling tide when leaving Molokai Island and a rising tide when approaching Oahu. More important is the rising tide as we approach Oahu, as falling tides tend to create currents moving away from the island.

Q9. What about protection from sharks?

Michael Twigg-Smith: Shark Equipment is REQUIRED and included in your escort fee.

Q10. Can the swimmer ride on the escort boat up to Molokai?

Michael Twigg-Smith: Because seasickness can be an issue, it is recommended that swimmers and their crew take the short 25-minute plane ride from Oahu to Molokai. The boat ride up is challenging and causes fatigue.

Q11. Can the captain take photos and videos of your swim?

Q12. Where does the escort boat depart Molokai?

Michael Twigg-Smith: At Kaluakoi Beach on west Molokai. Find the swimming pool at Kaluakoi; the beach there is were we start the swim.

Q13. When the escort boat arrives at Kaluakoi, do we start the swim immediately?

Michael Twigg-Smith: No. The boat and crew need to be prepared for the channel crossing, it usually takes between 45 minutes and an hour.

Q14. What about the stinging creatures?

Q15. How important is my nutrition (feeding) during my swim?

Michael Twigg-Smith: Nutrition is vital while swimming the Molokai Channel. It is as important as your mental and physical conditioning. Swimmers who use liquid carbohydrates have greater success [compared to] those who do not. Your feeding regimen should be well-planned and practiced. Feeding normally occurs on the starboard (right) side of the boat. Please organize an effective delivery system for your nutrition.

Michael Twigg-Smith: Most of the swims have been ending at Alan Davis Beach. It is 2 km closer to Molokai and the currents are usually better on that approach to Oahu. It is advisable to swim back to the boat from Alan Davis because the walk to the parking lot is about 400 meters on a rocky trail. If you do walk out at Alan Davis, be absolutely sure you have slippers or similar footwear to make the hike.

At Sandy Beach, the parking lot is very close. If you have people meeting you at Sandy Beach, you can ride with them back to Waikiki Yacht Club to gather your belongings.

The car ride and the boat ride back to the club take about the same amount of time.