Beyond Avalon Returns To The Deep And Dark 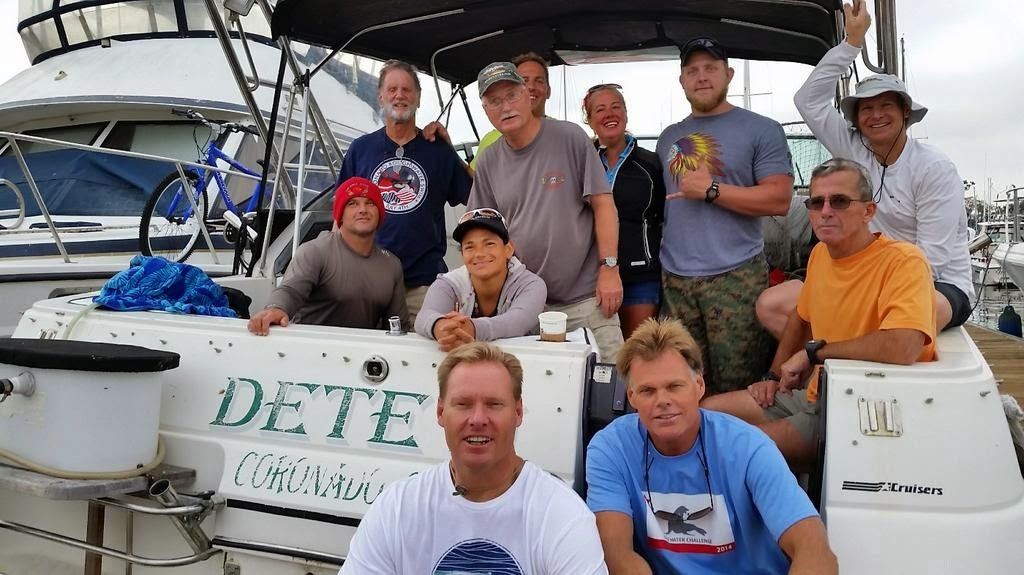 Doug Stanley was going to shift the paradigm of open water swimming with the constant global, real-time coverage of selected open water swims, especially those unprecedented ultra-marathon swims across lakes, channels and oceans.

Utilizing the SmackDab platform, fans can view open water swimmers no matter where they are located around the world or what conditions they traverse the planet’s open bodies of water. It is what Stanley planned for Benoit Lecomte’s swim across the Pacific Ocean, Jamie Patrick’s swim across Lake Michigan, and Ben Hooper’s swim across the Atlantic Ocean.

But in all other situations and among all other swimmers, viewing of an actual crossing, especially by those out in the world’s oceans, is limited to those fortunate few who are paddling or kayaking alongside the swimmer or who are members of the support crew on the escort boats.

Such was the scenario when Beyond Avalon attempted its 76-mile (122 km) ocean crossing from Santa Catalina Island to La Jolla Cove near San Diego on the California coastline.

While it was recently reported that the relay crossing was halted due to shark encounters (see here), the reality of the situation was much more dramatic and potentially dangerous. But only the eyewitness accounts and a few videos and photos captured the situation.

Like the individuals who they were raising money for, the relay was willing to take significant risks on behalf of their cause and for their support of fellow swimmers and citizens.

Grove calmly summarizes the audacious attempt that was called 40 miles from their start. “It really was quite an adventure. And the thought that on that Friday night, all night, while we were swimming in utter darkness – it was pitch black out there – the critters that caused us to eventually abandon ship were swimming all around us, frightens me a little, after the fact.”

The critters were, in fact, the apex predators of the deep and the denizens of the domain where Grove and crew challenged themselves.

The relay was fully intended to be non-stop, but the first time the relay stopped for safety purposes, it was Grove who found himself in the water. “We simply saw a number of dorsal fins surface and submerge, repeatedly and at a distance. Penny [Nagel] and Dana [Selles] claim one shark appeared to be large and possibly a Great White. My kayaker was the first to spot one, directly in front of us.

I jumped up on the kayak. We skirted over to the [escort] boat and got out of the water, watching as multiple dorsals surfaced and submerged
.”

Nagel recalls the tense situation, “We held our position in the water. Those sharks were not aggressive, but the fish finder on board showed a lot of activity 30 feet below. Some spotters said it was 7-8 sharks [in total]. We watched them for 5-10 minutes. Then a very large shark came up that I assume was a Great White Shark. It surfaced with a towering fin about 2 feet above the water. After that, the smaller sharks seemed to move on.”

Grove’s immediate reaction was natural under the circumstances. But even Grove agreed that the sharks did not exhibit any aggressive behavior in their natural environment. After a 30-minute team discussion on the boat, Grove decided to re-enter the water. Will Miller, the co-organizer of the event, offered to accompany Grove for the remainder of his leg. “After my leg, I stayed in the water and accompanied Will for most of his scheduled leg. Everything seemed fine.”

Next on the rotation was the lead swimmer, Dave Speier. “Dave was only a few minutes into his swim – believe me my eyes were glued on Dave every second – when a shark surfaced at full speed, almost coming out of the water about 20 feet behind Dave, wildly flapping its caudal fin side-to-side in a beeline toward Dave,” recalls Grove. “Most of us on the boat saw this. We yelled, the kayak was right there, within arms reach as we had modified the distances. Dave pulled himself up as the shark submerged and passed under the kayak. This shark was going hunting. No doubt.”

Nagel similarly described the shark encounter. “At 10:15, Dave got in the water. We were set to resume with 1 swimmer and 1 kayaker. About 30 minutes into his swim at approximately 10:45, a shark propelled out of the water behind him with his tail whipping rapidly. He went down, then his fin surfaced again as he was swimming fast in a straight line towards the swimmer. He dove down and luckily since everyone was on point, Dave was able to jump on the kayak. When he came aboard, he was cut on his arm and leg from the quick exit onto the kayak.”

With Speier and the kayaker out of the water, the team discussed possible courses of action for about an hour as Grove time-stamped the GPS coordinates on interrupted swim (note: the course is posted here). “I have all the GPS data. It is interesting to see the drift of the boat as we sat dead in the water discussing possible approaches. We drifted northeast a fair distance.”

Nagel added, “At that point, we agreed that it wasn’t safe with the aggressive nature of the encounter, but the Shark Shield was still charging. Two swimmers stated they would not get back in the water and two more said if we did resume, they would swim but not at night. There had been no moonlight on Friday night so it was still going to be extremely dark on Saturday night. They felt we would have no response time in the dark if another encounter happened.”

Grove summarized the team’s possible courses of action. “We considered having each swimmer wear a Shark Shield and we would stop dead in the water while it recharged. I would be the first in the water to test the Shark Shield’s effectiveness. We would be in a very tight formation, almost touching the swimmer from all sides. But in the end, after considering the way the shark came up on Dave, we came to a fairly solid consensus that that type of attack was simply indefensible.”

It was an outright scary visual. “That shark was moving so fast that momentum itself guaranteed some form of physical contact between the swimmer and the shark. I didn’t even have time to get my mask on, much less enter the water to fend off the shark with a spear. We aborted [the attempt].”

Grove had earlier decided that a Shark Shield was going to be used regardless of expense. He ordered one, although at the time, most of the team believed the equipment was unnecessary. “Then Penny and I starting querying divers and dive shops, hoping to find someone to loan or donate a second device. No luck. So the morning of August 19th, I ordered and paid for the second one. I had it delivered one-day, but it didn’t arrive until we were about 20 miles off the coast. But there was no great concern expressed by the team: ‘We’ll use it at night, and add spotters and decrease distances during the day…’“

Although the team abandoned its attempt last week, they are making plans for another Avalon-La Jolla Passage for 2015. “The team, as a whole, is now in agreement about the need for the Shark Shields at least. And given the mindset of the extraordinary individuals that are on this team, there is already substantial chatter about how we are going to successfully traverse the Avalon-La Jolla Passage next year.

It has been an incredible honor for me to participate in an event that drew such an elite team. Person for person, I believe we represent the standard of selfless devotion to a worthy cause. And as Will is often reminding me, ‘Things happen for a reason.’ I see our planning, implementation, and real-time response to changing conditions and reality as a standard of behavior for events that go where none have gone before.