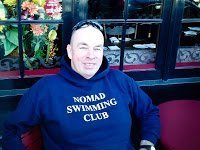 According to Donal Buckley of the LoneSwimmer.com who is in contact with the Stephen Redmond team headquartered on Oahu and Maui, Stephen is attempting his fifth leg of the Oceans Seven today.

With the Catalina Channel only recently completed, his body has little time to recover, but with 80% of his effort depending on his steel-trap mind, odds are good in the State of Aloha. With the North Channel conquered, the English Channel done, the Strait of Gibraltar in the books and the Catalina Channel out of the way, the Molokai Channel will loom large on Stephen’s radar for all of today and most of tonight.