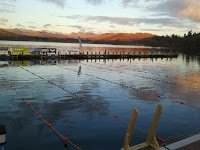 He moves markets. He creates new ones. He inspires as he leads.

Colin Hill started the Great Swim in Windermere that was one of the catalysts for helping make the United Kingdom the center vortex of the sport of open water swimming. He then moved on to elite competitive racing and made the Olympic 10K Marathon Swim in Serpentine the greatest viewed open water swim in history. And now he has shifted his focus to cold water swimming.

From mass participation to professional racing to cold water swimming, Hill knows where the sport is going.

His first Big Chill Swim in Windermere was a huge success with the water temperature at 4.6ºC (40ºF). Set in the Iconic English Lake District, the cold water classic attracted over 250 participants from around the world with swimmers travelling from Belgium, Ireland, Latvia, Russia and South Africa to take part.

The sold-out event is part of the International Winter Swimming Association calendar and included presentations by Ram Barkai and Jack Bright. Entries have already opened for the 2014 date on February 1st at www.chillswim.com where the races include Penguin Dip (30m non-competitive Swim), 30m Head up Breaststroke, 60m Freestyle, 450m Endurance Swim & Team Relay. Opening up at a later date will be a ‘Special K’ event which is an invitational 1 km race & a junior Ice dip.