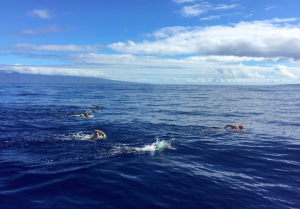 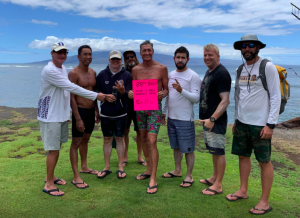 Nine months after Bill Goding recovered from his second shoulder surgery, he completed his 20th career crossing of the AuAu Channel on May 18th (not including a few more relay crossings).

Goding has crossed this channel individually more than any other swimmer, but this past Saturday he swam from Club Lanai to the Mala Wharf in Lahaina, Maui.

The 65-year-old swam with his younger Ala Moana Beach Swim Club teammates Ryan Leong, Hudson Slay and Stefan Reinke.  Quinn Riordan and Marcus Guttman were also part of the six-man tandem swim that was about 16 km in distance, taking 5 hours 22 minutes.

Pat Goding reported, “There were great conditions, smooth with minimal wind; however, they faced strong currents at the end so they finished at Mala Wharf instead of Kaanapali Beach.” Copyright © 2008-2019 by World Open Water Swimming Association