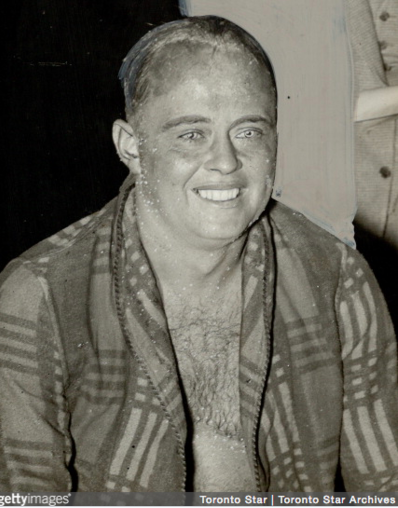 William “Bill” Goll, born about 1908, finished second in the 1930 Manhattan Island Marathon Swim to kick-start an illustrious career where he carved a niche as a true pioneer in the sport of marathon swimming.

Goll was posthumously inducted in the International Marathon Swimming Hall of Fame as a member of the Class of 2010.

Over the course of his varied and three-decade career, Goll participated in nine Canadian National Exhibition swims, one of the most prestigious marathon swims of its era, between 1931 and 1954 with many top five finishes.

In the later stages of his career, Goll also participated in at least five 22.5-mile swims around Atlantic City in New Jersey between 1954 and 1959, always finishing in the top 10 despite being between 47 and 51 years old.

To make ends meet, he even traveled as a high diver between 1935 – 1939 with a carnival during the Great Depression.

Truly an early pioneer and a rare one, doubling as a high diver.

For more information on Goll and his fellow inductees in the International Marathon Swimming Hall of Fame, visit here.