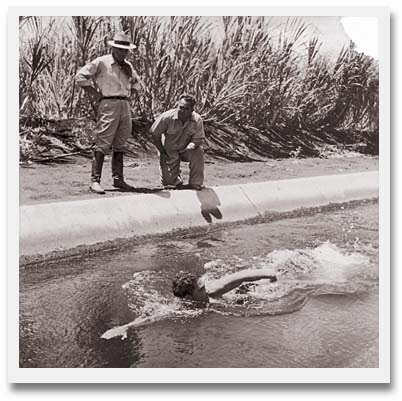 Not many swimmers make all of these claims, but Bill Smith did during his remarkable life.

Smith was one of Hawaii’s greatest swimmers who proved his speed and stamina in all sorts of distances, venues and competitions.

After returning home to his native Hawaii, he moved to Maui to train with the legendary coach Soichi Sakamoto where the training regimen included swimming against the currents in Maui’s irrigation ditches.

Smith attended Ohio State University for 1 year before joining the Navy. After World War II ended, he returned to Ohio State to complete his degree and return to swimming. He won a total of 36 individual and relay titles in the national, Big Ten and NCAA championships. He set 12 American records at 18 different distances and held 7 world records. At one time, Smith held all of the world records in freestyle swimming events between the 200-meter and 1,000-meter distances.

One of his greatest accomplishments was winning 2 gold medals at the 1948 London Olympic Games in the 400m freestyle and the 800m freestyle relay. Later, he became captain of the lifeguards in Waikiki Beach on Oahu and the Water Safety Director of Department of Parks and Recreation for the City and County of Honolulu.

He also coached the K-Bay Swim Club at the Kaneohe Marine Air Station and the Kamehameha Swim Club for 20 years.

A true waterman. Photo courtesy of the Hawaii Swimming Club shows Bill Smith training in an irrigation ditch in Puunene, Maui under the tutelage of Coach Soichi Sakamoto who pioneered resistance training by having his swimmers work against a current.