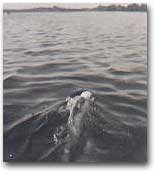 Nearing midnight with winds howling and the mighty lac Memphrémagog tossing and turning with endless whitecaps, Billy O’Connor was torn: should he continue his attempt across the lake, take refuge near the shore, or get out and try another day?

It was a tough decision.

O’Connor was out swimming near the middle of the 26-mile long glacial lake, so he and his crew decided to head towards shore.

With rolling hills, they wanted to see if they could catch a break in the beating that the local 19-year-old was taking. The flotilla headed towards baie Macpherson, a protective bay nearly halfway to O’Connor’s goal.

The crescent-shaped inlet was just what they needed. O’Connor and his crew were well aware of the fate of another local swimmer Lamontagne Lorenzo who had valiantly swam for 21 hours 30 minutes only 5 weeks earlier before being pulled from the water only 2 miles from his goal. Fortunately, the slight respite from the storm in baie Macpherson enabled O’Connor to continue and make history.

After walking into lac Memphrémagog on its southern shore in the American state of Vermont at 4:30 pm, and braving a storm late through the night, 0’Connor triumphantly walked up on the shore of Magog, Québec, Canada at 11:05 am. He became the first person to successfully cross the entire length of lac Memphrémagog. His 18 hours 35 minute battle against the lake whose Algonkian name means “where there is a big expanse of water” became the inspiration for the annual 34 km Traversée Internationale du Lac Memphrémagog.

What started locally with young student O’Connor in 1955 is now an international gathering of competitive professional swimmers from around the world that has been going on for 34 years since 1979.