Members of the Black-Ice Open Water Swimming Club, based in Black Rock, Australia (outside of Melbourne), are one tough, dedicated group of open water swimmers.

Over the years, these athletes have proven themselves in the English Channel, the Cook Strait and numerous Rottnest Channel Swims.

They should be rightly proud.

With a flight from Melbourne to London over 10,000 miles (16,913K), the commitment to their sport and passion for channel swimming is without question. With this enviable track record of success, what do they do special Down Under in Melbourne? 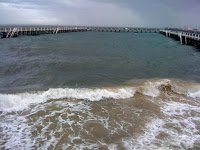 To begin with in order to become a member of the Black Rock Icebergers (Black-Ice), you are required to complete a 3K circuit at Brighton Baths during the winter when the water temperature must be at or below 10°C (50°F) under the following rules:

1. no wetsuits and 2. no neoprene swim caps.

The Black Rock Icebergers train every Saturday morning throughout the year at the Brighton Sea Baths, including winter when the air temperature ranges from 6°C to 15°C (42°F to 59°F).

Our non-neoprene caps off to this dedicated group of Australians.