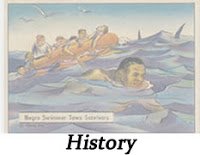 Charles Chapman, Jr. was the first African-American to swim across the English Channel and is celebrated in the International Swimming Hall of Fame‘s Black Swimming History Exhibition.

The Exhibition tells of the aquatic history of sub-Sahara Africans who were considered for centuries the world’s greatest swimmers.

The International Swimming Hall of Fame tells of the story of enslaved African swimmers and divers who created enormous wealth by harvesting pearls and recovering sunken treasures in the water.

Charlie ‘The Tuna’ Chapman – an African-American pioneer in the open water swimming world – crossed the English Channel in 1981, completed the Manhattan Island Marathon Swim in 1988 and 1989 as well as a number of butterfly swims around Alcatraz Island in San Francisco.

His interview can be seen here.