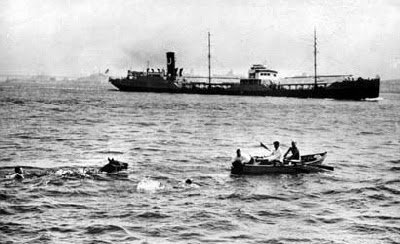 But occasionally pets and animals swim across open bodies of water for various other reasons. Some swims are documented; most are not.

Back in 1938, Blackie the Wonder Horse‘s solo swim in San Francisco Bay was clearly documented and followed the commonly used rules of that generation.*

The 12-year-old horse was the object of a US$1,000 bet between Bill Kyne of the Bay Meadows race track and his owner Richie “Shorty” Roberts of the Roberts-at-the-Beach restaurant in Marin County, California.

The two men bet that Blackie could not swim across San Francisco Bay.

On October 1st 1938, Blackie calmly walked into the water and swam with two pace swimmers and behind a row boat alongside the Golden Gate Bridge. 23 minutes later, Blackie walked up on shore at Fort Point in the San Francisco side of the Bay. Not only was Blackie no worse for wear, but he also had to pull along Shorty who hung on his tail the entire swim.

Video of Blackie the Wonder Horse swimming across the San Francisco Bay is below. Reportedly, his record still stands in the Equine Division.

Blackie – the horse that swam San Francisco Bay from Richmond SF Blog on Vimeo. * Swimming behind a row boat at that time was not considered outside the rules of open water swimming.