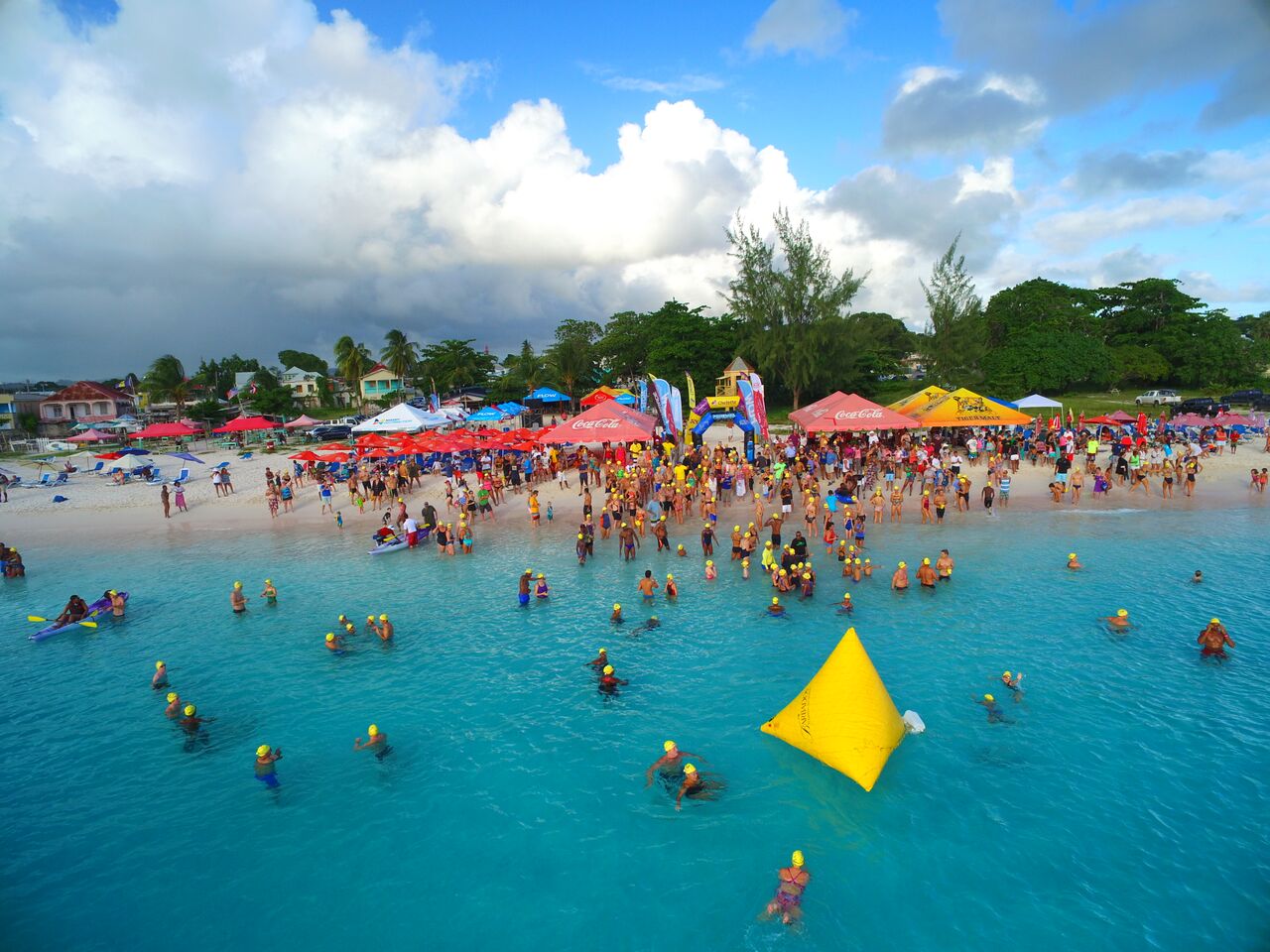 Courtesy of Caribbean Aerial Photography of the Barbados Open Water Festival before the 1.5 km race in Carlisle Bay Barbados. 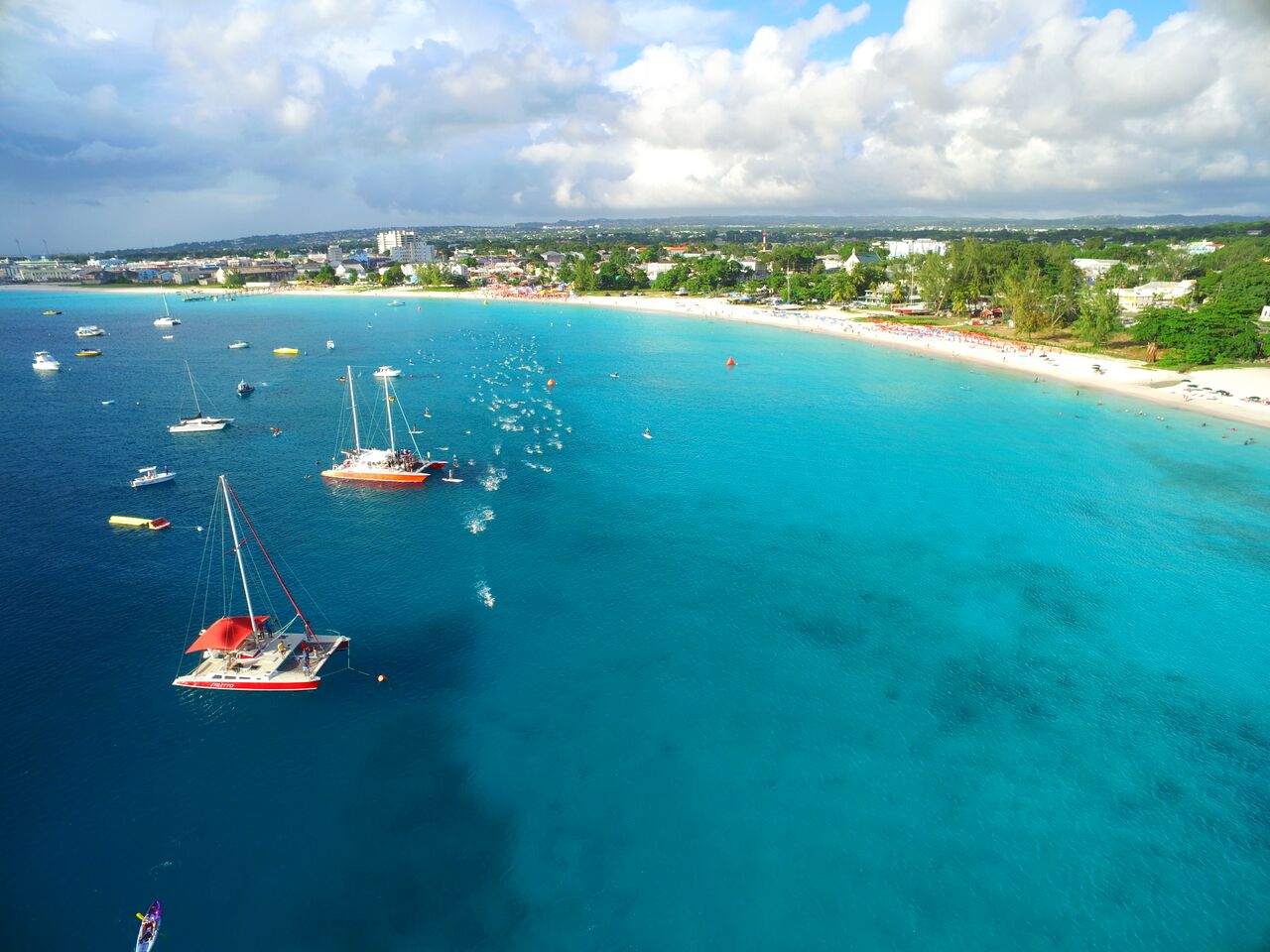 Courtesy of Caribbean Aerial Photography of the Barbados Open Water Festival before the 5 km race in Carlisle Bay Barbados. 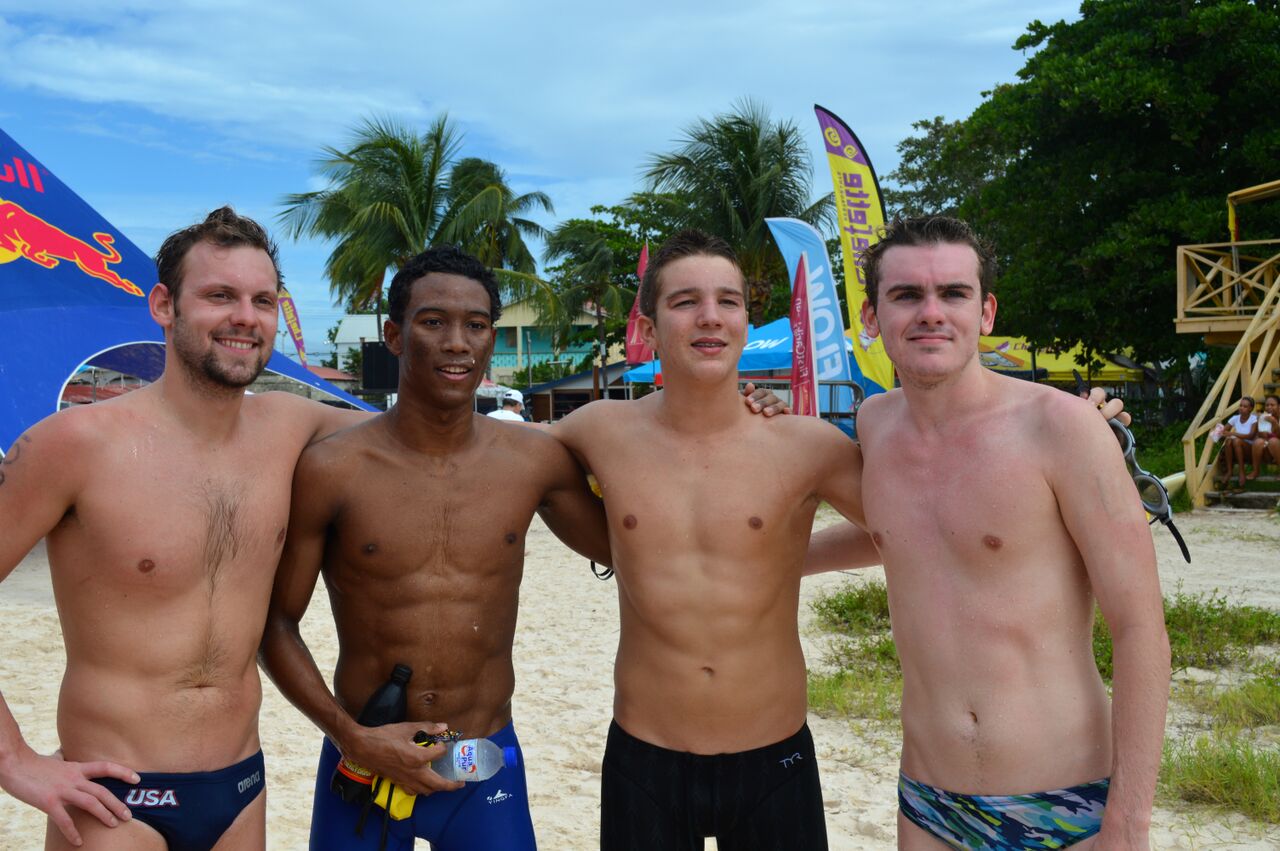 305 swimmers converged on the spectacular Carlisle Bay in Barbados for the fourth annual Barbados Open Water Festival. “A wonderful mix of recreational swimmers, talented junior swimmers and highly competitive masters swimmers lined up with a few elite athletes in the 1.5 km and 5 km races. A Just For Fun swim for a children’s charity attracted additional novice swimmers,” said Kristina Evelyn.

American Taylor Abbott was victorious in both the 1.5 km and 5 km races. The 2014 world junior open water swimming champion Abbott swam to a convincing win in the shorter race (17:41.81) ahead of some young Barbadian national swimmers. Luis Weekes (18:27.57) and Kobi Talma(18:49.32) finished second and third respectively with professional triathlete Jason Wilson (18:52.10) coming in fourth.

The 5 km swim was a different story where the young Abbott held off the seasoned Olympian Alex Meyer of the U.S. Meyer and Abbott were neck and neck for much of the course with previous winner, Christian Marsden of Trinidad keeping pace with the leaders. It was looking to be a very close finish until defending champion and crowd favorite Meyer sprinted away from his younger competitors with 16 seconds to spare.

However, a protest was immediately lodged by Abbott who claimed that Meyer passed the wrong side of the buoy. The judged upheld the protest as Meyer acknowledged his error. “In the heat of the moment while sprinting to finish, he wrongly considered the buoy in question as a guide buoy and did indeed swim on the wrong side,” explained Evelyn. Abbott was declared the winner clocking 57:16.01 in his win with Marsden (58:17.21) second, Jivan Chee Foon (1:02.32) of Trinidad third, Wilson of Barbados fourth, and Kent Mullins (1:05.46) in fifth.

Meyer said, “I would love to come back in 2016. It is an excellent opportunity for open water swimmers to enjoy a great vacation and the Barbados experience while competing at a high level.”

“We enable training on island at either the island’s Aquatic Centre or on the event’s race course in the sea,” described Evelyn.

In the women 1.5 km race McKayla Treasure (20:15.23), a national junior swimmer barely edged out famed American masters swimmer and former professional triathlete Eney Jones (20:18.75) for the top spot. But Jones returned the next day and took the top position on the awards podium in the 5 km. Rebecca Lashley of Barbados finished third in the 1.5 km and second in the 5 km.

Masters swimmers with impressive resumes such as British masters swimming champion Stuart McLellan and American Darcy LeFountain won their respective age group divisions. Doncaster Dolphins of Melbourne Australia sent a 12-member team including Dorothy Dickey (world record holder in the 85-89 age group in the 800m) who claimed second in the over 65 age group in the 1.5 km.

“In just a few years the Barbados Open Water Festival has evolved into a global swimming event that attracts swimmers of all ages and abilities,” says Evelyn. “As with past events, 2015 drew swimmers from 7 to 86 years of age from countries across the world including the USA, UK, Canada, Netherlands, Spain, France, Czech Republic, Belgium and other Caribbean islands.

Many are swimming for causes or overcoming barriers such as swimming their first race in the sea. Every year there are heart-warming stories such as Suzannah Fullagar of the UK who swam the 5 km to raise funds and awareness for the Mane Chance Sanctuary, a charity that rescues abandoned horses and works with kids with life limiting illnesses. Another visiting swimmer Dennis Vanderheiden undertook both races pulling a Barbadian paralympic athlete in a boat behind him. There were some groups who have returned several times such as the Berkley Aquatic Masters from New Jersey and a growing number of swimmers from L.O.S.T (Lake Ontario Swim Team)
.”

Evelyn is planning the 2016 event with a 10 km marathon swim under consideration. “Swimmers left messages like ‘Swims were beyond expectations’, ‘What a total blast it was in Barbados’, ‘As I leave Barbados, I am just in bliss reflecting on the amazing people I met’, and ‘I love this awesome swim event,’ – all music to our ears.”

The 2016 Barbados Open Water Festival is scheduled for November 5th-6th 2016.