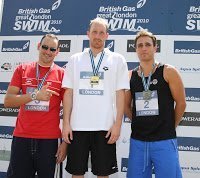 While supermodels and celebrities joined 5,000 other open water swimmers in London at the British Gas Great London Swim and a few dozen elite athletes in the Royal Victoria Dock.

The event was spectacular.

“I’ve never seen so many swimmers gathered together all in their wetsuits with the one sense of purpose. I’ve never really done any outside swimming before and so it was great to get a lesson off Dave. He gave me lots of great tips too, about keeping calms, breathing the right way and saving your legs for the latter stages.”

With 16 waves of 300 swimmers each, the race was both safe and enjoyable – and extraordinarily competitive.

Thomas Lurz of Germany successfully defended his title after slightly edging away from the rest of the elite field at the 800-meter mark point to win in a blazing fast 16:42.57.

But right behind Lurz came a photo-finish between second-place Ky Hurst, the Australian Olympian, in 16:43.67 and Petar Stoychev of Bulgaria in 16:44.29. In a swim reminiscent of his miscalculation at the end of the Beijing Olympic 10K Marathon Swim, early leader David Davies took a different line to the finish and ended up in a pack behind the top three.

Lurz said, “It was a really fast race, much faster than last year, but the field was so much stronger. The pace was very quick from the start and I just tried to go as well as I could, but due to the speed it wasn’t such a tactical race. I managed to get into the lead as we came down the finishing straight and it was just a case of pushing on and I’m delighted to have won.”

In the women’s race, Olympians Cassie Patten and Keri-Anne Payne took off with their British teammate Katy Whitfield and Jana Pechanová of the Czech Republic to clear the crowded field after only the first 200 meters.

By the halfway mark, the fast foursome were 30 meters ahead of the rest of the field when Payne and Pechanová gained a slight edge. But in what may be indicative of her increasingly competitive positioning leading up to the 2010 World Open Water Swimming Championships, Patten fought back brilliantly, moved clear down the final straightaway and closed out an impressive victory in a fast 17:48.20 with Payne second (17:49.46) with Pechanová (17:50.00) a close third.

Patten said, “I dropped a bit behind Keri-Anne and Jana and so it was a case of first putting my head down and catching up with them, which I managed to do. From there, I got ahead and then I just concentrated on going as hard as I could. My fitness levels are good at the moment and so I’m very happy with how the race went, especially as the conditions were so good and we were able to go so fast.”

Winners all around – including the efforts of the 5,000+ swimmers, many of whom were swimming for charity – with £250,000 raised overall.