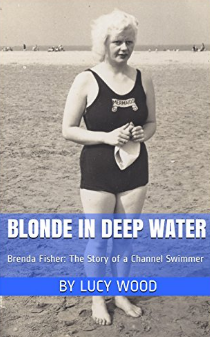 Michael Read of the Channel Swimming Association said of Brenda Fisher, “[An English] Channel swim is and always will be a battle of one small, lone swimmer against the savage vastness of the open sea. Brenda’s name was on every tongue and she was the toast not only of Grimsby, but of the whole nation. Brenda was very much a pioneer.”

Fisher was born 1927 and had a biography published about her life at the age of 87 (Blonde In Deep Water). The British open water swimmer from Scartho, North East Lincolnshire is the daughter of a Grimsby trawler skipper and seemingly had aquatic abilities and a high navigational IQ inbred in her DNA.

At the age of 24, she was the first female finisher at the Billy Butlin Cross Channel International Swim across the English Channel in 1951, swimming from France to England in 12 hours 42 minutes. Her fifth place finish broke the previous women’s record of Florence Chadwick in 1950 of 13 hours 20 minutes.

Three years later, she entered the 1954 Billy Butlin Cross Channel International Swim and finished third overall as the first women in 14 hours 36 minutes across the English Channel. Among her other swims, she won the 1956 29-mile (47 km) Nile River swimming marathon [see video highlights of the race here].

Later, she raced 32 miles (51 km) across Lake Ontario from Niagara to Toronto in Canada in 18 hours 50 minutes that was 2 hours 6 minutes faster than the previous record set by Marilyn Bell.

She leveraged her success in the water to dryland opportunities like appearing on the Ed Sullivan Show and becoming a pin-up girl for 7 Up lemonade.