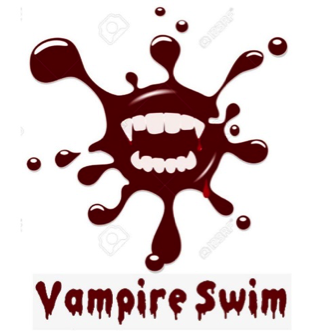 This coming Halloween on October 31st, Vampire Swims are coming to a beach near you as open water swimmers organize an international call for blood.

Entry fee for these swims will include proof that the swimmer has donated blood within 6 weeks prior to the swim.

Some venues are arranging a blood mobile to collect donations immediately after the swim.

Those who cannot make a donation of blood for medical reasons can make a cash donation to the Red Cross or some other similar organization.

A US$10 registration fee will also be expected of each swimmer to cover the cost of a custom, bloody-toothed swim cap and other incidental expenses with any remainder also to be donated to the Red Cross or other equivalent organizations that collect and distribute blood.

The event arose from discussions between Jaimie Monahan of New York City, Greg O’Connor of Boston and Phil White of Derby, Vermont. As the conversation broadened, more and more open water swimmers have come forward, willing to host and help this swim and blood drive. A Vampire Swim Facebook page has begun to spread the word around along with a new website, www.vampireswim.com.

Each venue is organizing its own swim. Minimum distance is 25 meters or more in some venues. Open water is generally in the 50s this time of year in the northern part of the United States and in Canada and Scotland. Vampire Swims are also a great way to kick off the cold water, winter swimming season in those locations where swimming continues year round.

The goal is simple: Have Some Fun, Do Some Good, Enjoy a nice cold, open water swim with like-minded Vampire Swimmers.