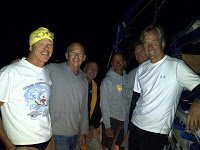 The Aquaboomers, a relay team made up of primarily SCAQ swimmers, broke the existing record for a Catalina Channel relay in the men’s 50-59 year age-group yesterday.

“We had great conditions and a beautiful moonlit night, although the water was a bit nippy at 62°F (16°C),” said Dan about their effort from the Southern California mainland to Catalina Island that broke the existing record held set in 2002 by the Swell Guys in 10 hours 35 minutes.

The excellent exploit by the six members of the Half Century Club was quick: the 7th fastest relay swim of all time.