Blue And White And Perhaps Red All Over 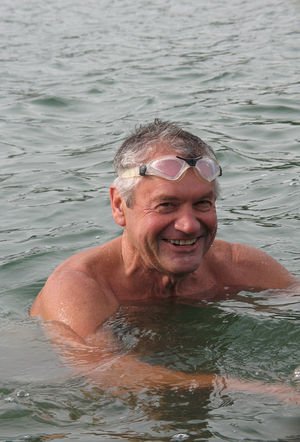 The Night Train Swimmers have motored down from San Francisco Bay to their starting point at Gaviota State Park near Santa Barbara, California and are ready to go for a 3 pm start tomorrow.

All systems are a go for their world record attempt and massive charity swim effort.

Along the way of their planned 228-mile California coastal swim, the Night Train Swimmers may encounter some of the largest creatures in the oceans – blue whales and Great White Sharks – as well as some of the disarmingly smallest – jellyfish of all sorts.

“We raised US$1.2 million for our Marine Veterans returning from conflicts around the world, which we donated to the Semper Fi Fund,” explains Vito Bialla, the captain and catalyst for the relay swim, on why the team is purposefully placing themselves in harm’s way.

“This year, we are honored to be helping the Navy SEAL Foundation as the beneficiary of our 2013 swim. The Navy SEAL Foundation is a non-profit organization with one purpose: to provide immediate, ongoing and unwavering support and assistance to U.S. Navy SEALs, Special Warfare Combatant-craft Crewmen, Naval Special Warfare support personnel, and their families. The Navy SEALs are very dear to us; we’re proud to have cultivated long-lasting relationships with these honoring their commitment and sacrifice to protect us is the most honorable thing we feel we can do.”

Bialla, an accomplished endurance athlete on land, on bikes, in boats, and in the water, is ambitious and relentless in going after his goals. “We’re looking to set a new world record for longest open water relay. At 3 pm on August 22nd, our team of six swimmers will begin a 228-mile (367 km) journey from Gaviota Start Park near Santa Barbara to the San Diego Yacht Club. As we make toward land, we’ll be joined by two fellow Vietnam veterans, Mike Thornton and former Nebraska Senator Bob Kerrey – both decorated Navy SEALs and medal of honor recipients – to complete the last leg of the race with us, helping to celebrate as we land on the beach in San Diego between Monday afternoon and Monday evening.”

The team of Phil Cutti, David Holscher, Zach Jirkovsky, Luane Rowe, Blair Cannon, and Grace van der Byl plans to cover the 228 miles in 80 to 90 hours, swimming non-stop as they raise money for the Navy SEAL Foundation. “In addition to our swim, our journey will be complemented by Mike Trevino – an ultra-running legend and winner of Badwater, the world’s toughest foot race – who will simultaneously cover 300 miles on foot.

I hope you will join our cause – the California Coastal Swim – and cheer on our world record attempt by making a donation. To make a tax-deductible donation, visit www.nighttrainswimmers.org.”

But swimmers down the coast of California can be tricky and dangerous. Hal McCormick, a legendary sailor has made more boat deliveries between Alaska and Mexico than almost anyone, will be aboard sharing his knowledge of the marine environment, currents and weather up and down the California coast. Patrick Horn is another exceptional skipper who will trade off piloting duties with Bialla. Five or six days after starting, navigating between islands and whatever comes up from the depths, the team plans to swim ashore in San Diego.

Nighttrain228 can be followed by their SPOT Tracker here.

If successful, the Night Train Swimmers will extend the current world record held by Ventura Deep Six when they swam 202 miles (325 km) from Ventura to San Diego along the California coast in 2010. The effort took the Ventura Deep Six sextet 4 days 5 hours 39 minutes and helped them win the 2010 World Open Water Swimming Performance of the Year.