Bob Bowman Loves Deck-ups And Ins And Outs Too 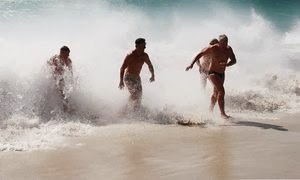 World Open Water Swimming Association-certified coaches understand the value of pull-outs and ins-and-outs for athletes who compete in triathlons and open water swims with on-the-shore finishes.

Pull-outs (also called deck-ups or pull-ups) are a pool training methodology whereby open water swimmers and triathletes pull themselves out of the pool after each swim and then dive back into the water for the next swim during an interval-training set.

The methodology prepares the athletes for the end of an open water race with an onshore finish or a T1 transition in a triathlon.

And it seems that at least one of the best American pool swimming coaches utilize these deck-ups in their own workouts among elite swimmers. The renowned Bob Bowman, coach of Michael Phelps, explains to SwimSwam (here) how he uses pull-outs with his elite Olympic athletes.

Towards the end of the set, Coach Bowman looks for the “wobble” when his swimmers are fatigued and are struggling with the tough set…something that open water swimmers and triathletes know well as they go from the horizontal (in the water) to vertical (on terra firma) after they swim fast in the open water.