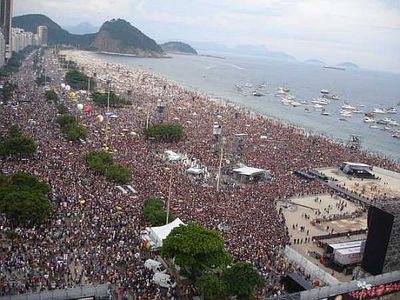 In the lead-up to the Olympic 10K Marathon Swim at the 2016 Rio Olympic Games, the FINA Sports Medicine Committee, the designated FINA Safety Officer, and FINA’s Technical Open Water Swimming Committee members may have to make some tough recommendations to FINA’s decision-maker Cornel Marculescu.

Behind the scenes and without question, Marculescu is the final determinant whether or not there may be a need to move the Olympic 10K Marathon Swim venue at Copacabana Beach due to safety reasons.

A foot and another unidentified body part, probably from a woman or a young adult, recently washed up on Copacabana Beach near the Olympic beach volleyball venue on June 29th in Rio de Janeiro. This is an alarming development.

Dr. Jim Miller of FINA’s Sports Medicine Committee has been the only FINA official to recommend a FINA marathon race to be cancelled due to safety reasons, but it was Marculescu who gave the approval. If the water conditions and other body parts start to wash up on Rio de Janeiro’s famous Copacabana Beach, not too far from the Olympic 10K Marathon Swim is held, then international pressure will grow on Marculescu to at least consider a move of the event to a cleaner location.

Marculescu will ultimately make that decision: to stay or to go. It falls on his shoulders and no one on any of the FINA committees have the authority to overrule his judgment.