Bodysurfing Into The Finish 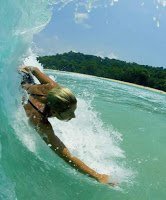 But key aspects are certainly always considered and taught by excellent and experienced open water swimming coaches as part of their fundamental program.

For competitive open water swimmers, body surfing skills are often the difference between two equally skilled athletes. The ability to out-body surf another swimmer into a beach finish is always exciting to see in a close ocean race. On the other hand, for the more casual open water swimmer, body surfing skills enable them to have more confidence going in and out of the surf zone and avoid getting hurt, surprised or wiped out.

As the power of the wave surges forward and they feel an increased speed, the swimmer kicks hard and enabling the ride to begin. Their hips are elevated as they kick and their head is up and looking forward with an outstretched arm and hand serving as their bow. They take a few good few breaths of air while they can in this position as they come sliding down the face of the wave, significantly moving faster than they ever could simply swimming.

As the wave breaks, they kick even harder in order to stay within the wave with their arm and hard still extended. Within the whitewater, they still kick but if they feel themselves falling out of the wave because they are moving more slowly than the wave itself, they start stroking with their back hand. Trying to stay within the whitewater separates the best body surfing open water swimmers from those without the experience or aerobic ability to stay with a wave. As the wave starts to fizzle out and the water starts to get shallower, they start to take a few strokes and get ready to dolphin into the finish.

Because the body surfing puts a lot of stress on their body due to their increased kick and efforts to stay within a wave, especially if they have traveled a fair distance without breathing, the most seriously committed open water swimmers who compete in ocean races practice body surfing just as they do other aspects of the sport.

But for those who do not have easy access to a beach, they can still prepare for body surfing in a pool by doing hypoxic sets. For example, in a set of 100s, the last lap or last 10-15 meters can be done without breathing. This helps replicate the anaerobic conditions they face during body surfing towards the end of the race.

When open water swimmers listen to surfers, they may hear some of these terms:

Ankle Slappers/Busters: small waves.
Back Down: to decide not to take off on a wave.
Bail out: to get away from, jump off, or dive off the surfboard just before a potential wipe out.
Barrel: a hollow channel formed inside a good wave when it breaks and curls over.
Blown Out: conditions that are created when the winds blow so hard and chop up the surf to render it difficult to ride.
Breaker: a wave that breaks on the way to the beach.
Crest: top portion of a wave.
Cruncher: hard-breaking wave that quickly folds over and is almost impossible to ride.
Cut out/Pull Out: to pull out of a wave.
Dolphin Pop: an underwater takeoff where a body surfer dives under the surface of the water as the wave prepares to break, does dolphin (butterfly) kick and then pops out on the face of the wave like a dolphin to perfectly catch the wave.
Eat It/Wipe out/Nailed: to miss catching the wave and get thrown by or off the wave.
Face: the unbroken wall, surface, or nearly vertical front of a wave.
Glassy: smooth water surface conditions caused by absence of winds.
Outside Break: area farthest from shore where the waves are breaking.
Over the Falls: To wipe out, or to get dragged over as the wave breaks.
Pounder: a hard-breaking wave.
Set: a group of waves.
Shape: the configuration, or form, of a wave.
Shore Break: waves break very close to the beach.
Soup: foamy part of the broken wave; the white water after the wave breaks.
Stoked:
Happy; excited; contented.
Stringer:
Swells: unbroken waves moving in groups of similar height and frequency.
Takeoff: the start of a ride.
Tube: the hollow portion of a wave formed when the crest spills over and makes a tunnel or hollow space in front of the face of the wave.