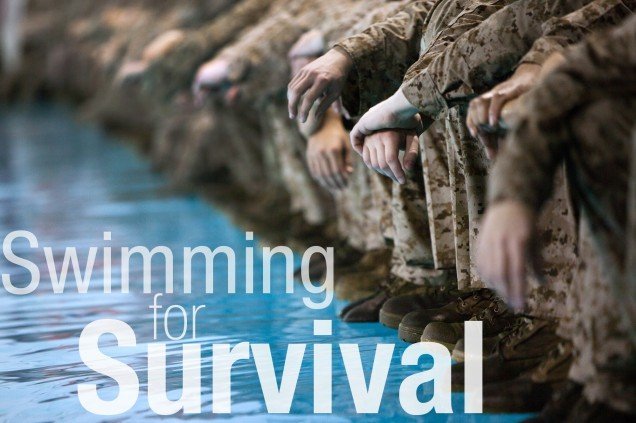 It is wartime and the United States Marines train to be ready for anything from battling onshore to dealing with combat situations in all kinds of unplanned conditions.

And it is rare they would encounter these conditions without their boots on.

And so when they train and do they practice their qualification swims in the open water, they swim with their boots on. “How many times are you going to abandon the ship without your boots on,” asked Sgt. Jerry D. Reese. “It’s more practical.”

And heavier. “They put you in situations to take you out of your comfort zone,” Reese said of the 25-meter basic swimming assessment followed by a jump off a tower, another 25-meter swim, and final surface assessment test that requires four minutes of treading water.

The modern-day samurai warriors remind us of the samurai open water swimming requirements:

“Just get in and swim…” is an instruction that simply would not work in ancient Japan.

No, the Japanese samurai learned suijutsu or suiei-jutsu (水術 in Japanese) as one form of a martial art of combative swimming.

Centuries ago, the Japanese samurai encountered numerous situations where he might need to cross a body of water, attack an enemy, fire arrows or defend himself while in a body of water with his armor on. Based on the warfare needs, the Japanese developed various different styles over the generations (suijutsu). For example, the Iwakura-ryu (style) included various traditional samurai swimming techniques including swimming with armor, eating while swimming, and swimming while tied with rope.

Other styles of ancient Japanese swimming techniques included the Shinden ryu (marathon swimming), Kankai ryu (ocean swimming), Suifu ryu (river/rapids swimming), as well as several other schools that were based on the topography and waterways where the masters were located (e.g., coastline or mountain areas). For example, if the samurai had to fight while wearing armor, they would study the Kobori ryu where the samurai would eggbeater (tread water like a water polo player or synchronized swimmer) while keeping their upper body above water to fight with swords, fire arrows or guns while in or crossing a river.

These ancient and refined martial arts of suijutsu are experiencing a revival of sorts in Japan.