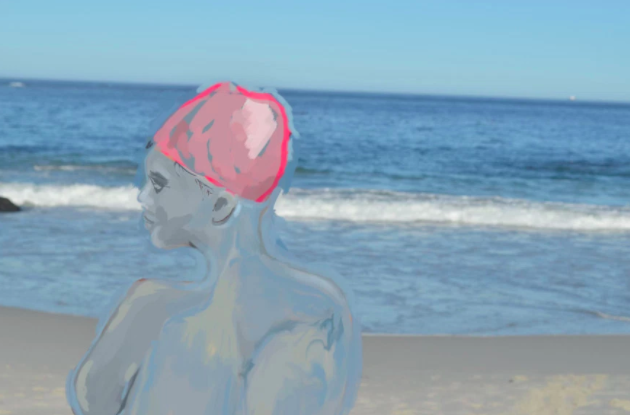 The Sunday Hot Chocolate Swimming Group was co-founded in 1999 by Andrew Chin and Ram Barkai. They swim in South Africa’s Camps Bay every Sunday, ending with hot chocolate.

It was this friendly group of South African swimmers that grabbed the attention of artist Charlie Martinson. “I started open water swimming in 2013. One day, a family friend invited me to go play in the waves at Camps Bay, where she would meet up with a friend who would actually swim out, past the waves, to the back of Camps Bay and across, and then back. Later on I found out this was called the Sunday Hot Chocolate Swimming Group – which I was asked to join.

Having the philosophy of trying anything once, I agreed. With the help of Ann, I became more comfortable in the ocean and for about two years I religiously swam three times a week…getting fitter and more and more confident in the ocean.

Swimming in the ocean is addictive. It is like going on a high – that first shock of walking into the water…sometimes one can’t even breathe, and it feels like a panic attack is coming on, or one’s body just hurts all over…but the encouragement from one’s peers, for me it was Daniel, Brian, and sometimes Arafat, egged one on – and I would start swimming, moving my limbs despite the cold, the shock, and the tension.

If this puts you off – imagine – eventually, when you and your body realize there is no escape from the pain, and the numbness, you are forced to let go of it, relax. For me – at that time – it was a physical manifestation of what I needed to do with my depression, a metaphorical proof of my strength…and empowering to feel like I alone was the one pushing myself forwards, with people swimming alongside me to ensure nothing dire could happen

Eventually, she attempted a 3.2 km swim in Langebaan, but got badly stung by jellyfish. “I think that experience, along with the daily demands of life, prompted a pause in the exercise.”

A few years passed and she got back into the swim of things at Clifton for the Bosom Buddies Swim – many ladies gathered to shed their tops and do a topless swim in order to raise funds for breast cancer. There are some beautiful, and private methods with which we aim to pay tribute to those we love, who we’ve lost to this disease. What struck me, above all else, was the safety everyone felt, the enthusiasm, and the strength from and love for all these women.