Boxed In By The Traditional Rules Of Open Water Swimming 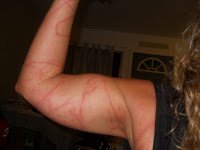 According to the various sources and knowledgeable individuals, some of the most venomous creatures in the world live in the oceans.

It can be very scary…and deadly.

The Environmental Graffiti ranks the box jellyfish as #1 on the world’s most venomous animal list, followed by the Brazilian wandering spider, Inland Taipan (snake), blue-ringed octopus, and the stonefish.

While there is a debate whether there are other creatures that should be ranked higher or which animal is truly the most venomous, Environmental Graffiti argues for the position of #1 by the box jellyfish because “it kills more people per year, mostly in Australia, than any other animal on this list. Since records started being kept in 1884, it’s killed more than 5,500 people.”

And this fact brings up an issue that is being debated among marathon swimmers, especially in light of the upcoming swims across the Florida . Because the rules of marathon swimming (as defined by the major governing bodies of channel swimming) and competitive open water swimming (as defined by FINA) have rules against swimwear that helps retain heat, enhance buoyancy or aids in performance, protective swimwear against deadly jellyfish falls into these categories according to some interpretations.

In other words, swimwear of certain configurations that protect the skin or of certain materials that prevent the venomous barbs from entering the human skin are judged to be illegal, outlawed by the traditional rules of the sport of open water swimming. Tradition has it that because open water swimmers of the 19th and early 20th century did not use or have the benefit of protective swimwear, then contemporary swimmers should not be allowed to benefit from protective swimwear.

Fair is fair, and the sport must compare apples to apples, is the traditional line of thinking.

This is certainly one perspective which is unassailable.

On the other hand, there are different perspectives: (1) safety should always be first, (2) the number of jellyfish in the oceans is proliferating, (3) the creatures that exist in the traditional waterways of the English Channel and Catalina Channel, or Lake Zürich or around Manhattan Island, are fundamentally different than the creatures that exist in the Caribbean Sea, South Pacific or around the Farallon Islands, and (4) protective swimwear generally does not enhance the speed of a swimmer; rather because of its porous properties, it actually weighs and slows down the swimmer.

As International Marathon Swimming Hall of Fame inductee Skip Storch has described the Florida Strait between Cuba and Florida, “I didn’t need a shark cage, I needed a jellyfish cage.”

Even the incomparable Petar Stoychev, the English Channel world record holder, 3-time Olympian, and 25 km world champion, argued that athletes, especially professional marathon swimmers who compete frequently around the world, need protection from the elements and marine life. He was an early advocate of the technical suits that were eventually outlawed by FINA and every national governing body in the world. But his perspective and first-hand experience of being the most prolific open water swimmer of modern times did not sway the global coaching community or decision-makers.

As Storch, Stoychev and many others know well, marine creatures can and do stop swimmers from traversing between certain islands in the world (e.g., Oahu to Kauai), swimming across channels or in the Caribbean Sea. It is the box jellyfish and Portuguese man o war – not the more popularly feared denizens of the deep like sharks, rays or sea snakes – that present the most practical obstacles to success…and safety.

For support crew, medical personnel or volunteers who have seen open water swimmers encounter box jellyfish, it is an unforgettable sight. The swimmer’s bodies are scarred beyond imagination with whip lashes of the jellyfish tentacles that send millions of venomous barbs into the human skin. The athletes cry out in a death howl, their bodies either convulsing in twisted anguish or paralysis quickly setting in. Their pain – that can last for hours – is so great that the only tears that flow are those of eye witnesses.

And when these swimmers encounter the unforgiving box jellyfish or Portuguese man o war, they are usually many miles and many hours away from a medical facility. Their agony continues on their escort boat as they are rushed to medical help on terra firma.

Because of the possibility of death and the undeniable human torment and unimaginable suffering caused by the box jellyfish, it is our opinion that protective swimwear in locations where box jellyfish are known to exist should be allowed. That is, it seems reasonable to allow protective swimwear by open water swimmers in waterways in the South Pacific or the Caribbean Sea as a general rule and for record-keeping purposes. While outside the established rules of the sport and strict outlines of the traditional practices of open water swimming, where safety and human suffering are involved, it seems reasonable to allow for exceptions to the rule.

Opinions will differ on this subject, but safety first has always been our guiding principle.

To understand what a box jellyfish does, view this National Geographic NOVA documentary below (23 minutes after the start of the NOVA’s Venom: Nature’s Killer television program: