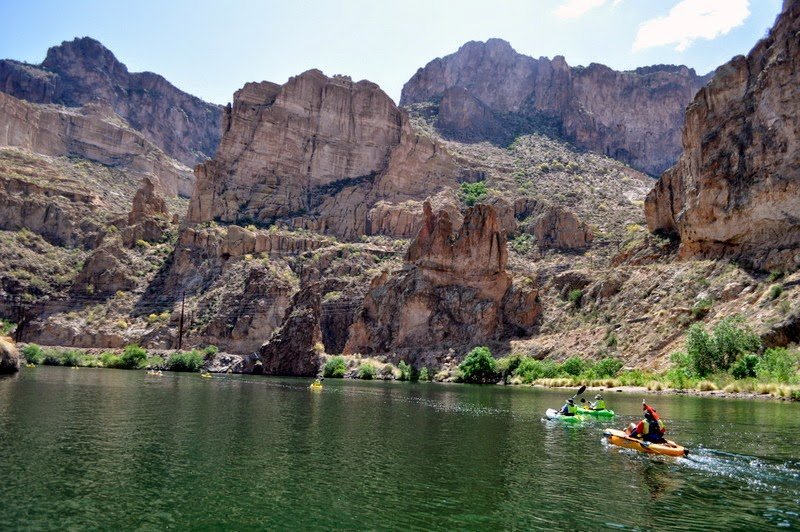 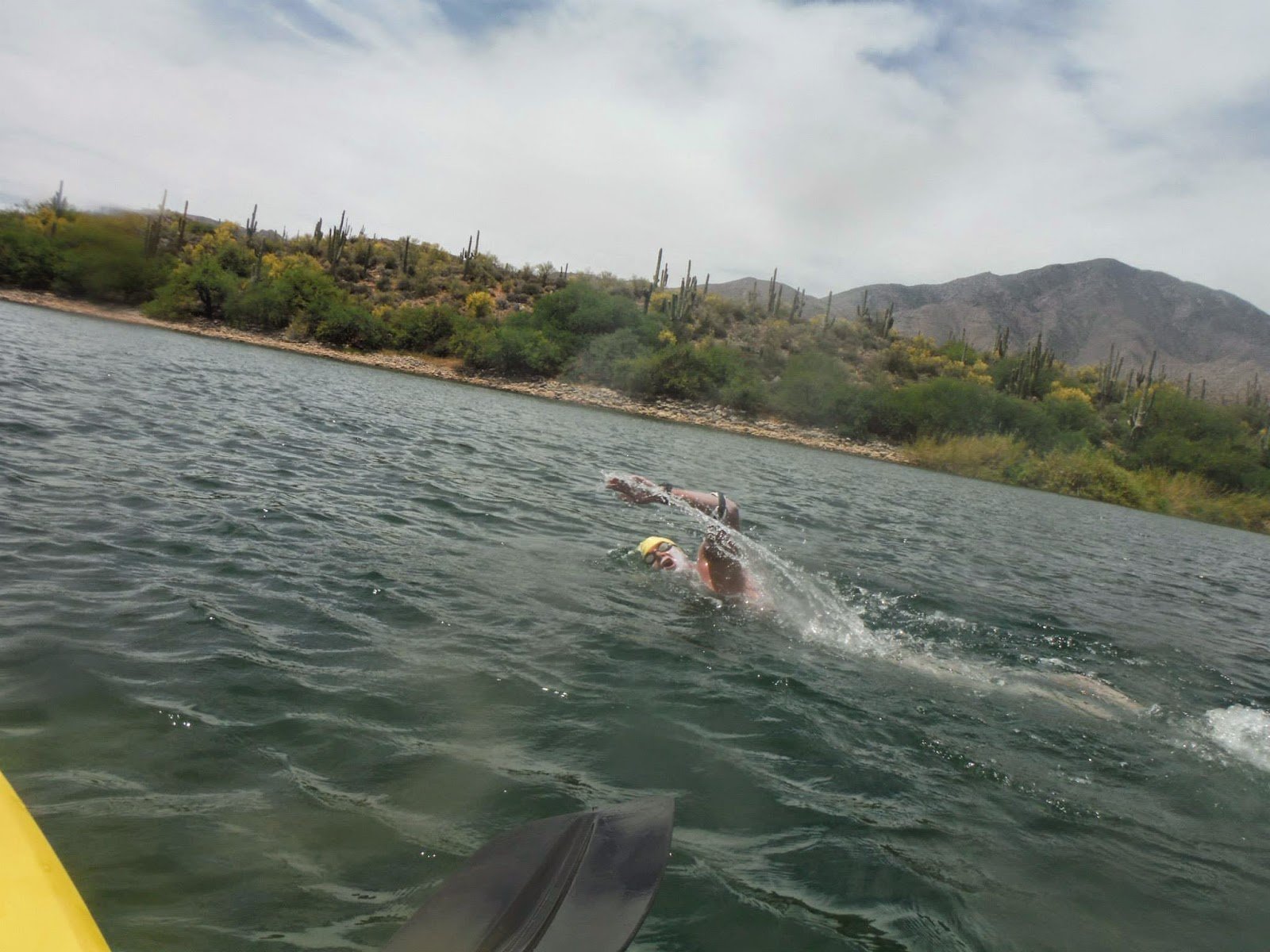 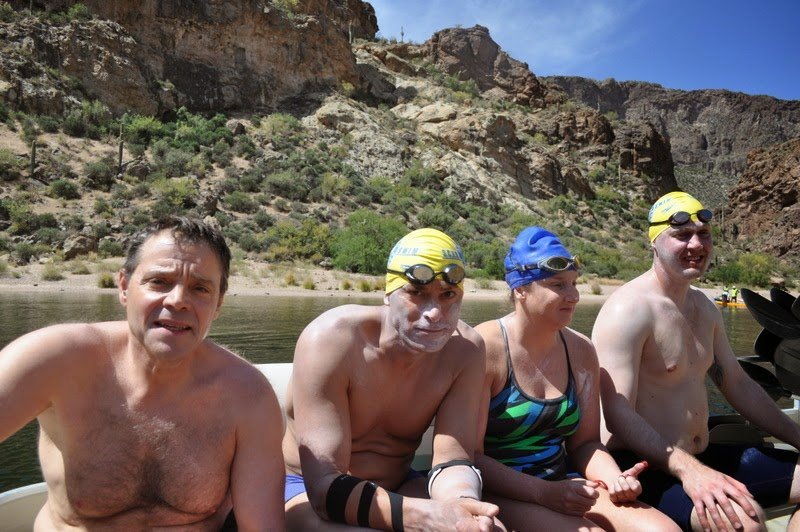 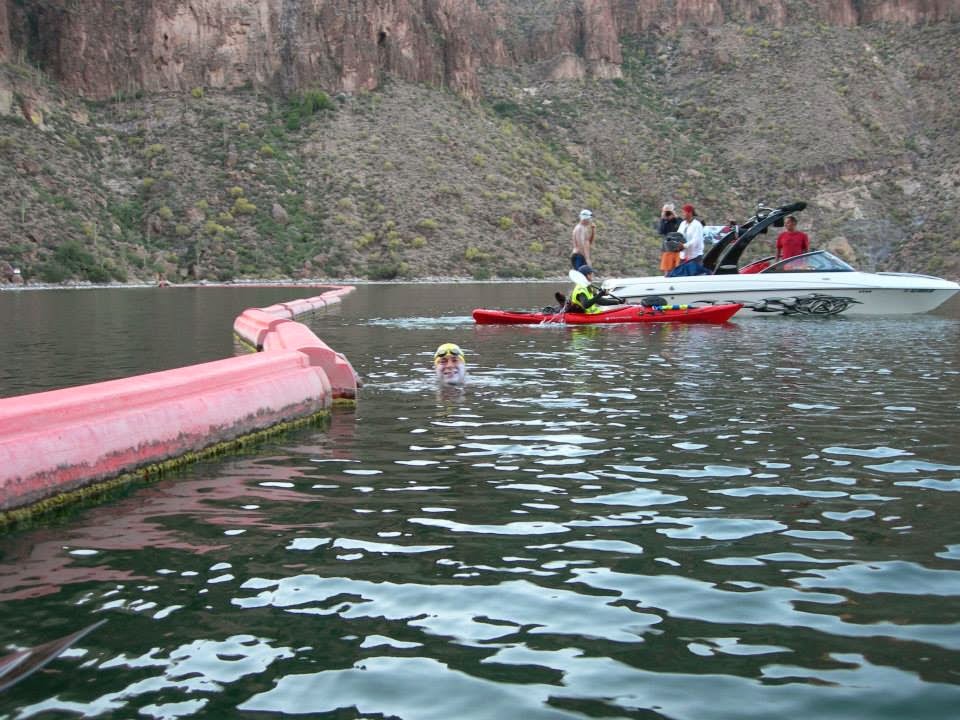 Brad Lundblad completed all four S.C.A.R. Swim Challenge swims in the desert of Arizona last week. Considering his condition and journey, it was quite the inspirational accomplishment.

His journey got underway when he completed the 9-mile (14.4 km) swim across Canyon Lake last year. “I also kayaked 9.5 miles (15.2 km) across Saguaro Lake last year for a lane mate. I think that really helped me mentally going into this in knowing what to expect.”

Because Lundblad did not do any open water training before these swims, the experiences in Canyon Lake and Saguaro Lake were key.

But underlying his accomplishments was Lyme disease. “It is a crazy disease that will literally rob you of your life. I’m always tired, but it’s not a normal tired. It’s more like your head is in a fog. At times it hits me and I just want to pass out. It affects my digestive system and the foods I eat. I’ve cut out a lot of dairy and breads. I have good days and bad days.”

Lundblad deals with the disease as best he can. “As for swimming, I never know how I’m going to be until I’m in the water. My doctor thinks I was born with it. She feels that you can carry it around with you and some traumatic event can trigger it. The crazy thing is the symptoms can be anything and you can just write them off like the fatigue to working too much or not getting enough sleep. I remember telling a friend how tired I was before moving to Arizona.“

After a six-month layoff to join the Army Reserves, the Mesa Aquatics Club masters swimmer. got back in the pool. “It would take me 2000 yards to feel somewhat loose. [But] my stamina was really bad and I could barely keep up with a swimmer that I use to be much faster than. That is what made me think something is not right. I found a doctor and went to him and told him what I was feeling. Hhe told me I had Lyme disease, but it took over 2 months and 3 tests to conclusively diagnose me. I think this disease is much more widespread than is known or being reported.”

Despite his condition, Lundblad is fortunate and appreciative of his situation in life. “I function on a high level for someone with this disease. I don’t function on a high level for a normal person. Swimming has been a huge blessing for me in my life. Not only the physical benefits I get out of it but also the mental ones too. I always feel like I’m ready to tackle the day once I get my swim in.”

But Lyme disease has created a new normal for Lundblad. “I can’t go all out and I can’t go into another gear like most people. Sometimes during spring sets I can feel all the energy drain out of my body. Usually I have to pace myself. Having Lyme, I have lower oxygen in my blood cells. I knows this because when I go hard on sprint sets, I’m gasping for air at the turns before I hit the flags. Also muscle tightness is an issue for me.”

Yet going into the S.C.A.R. Swim Challenge, his goals were clear: to complete all 4 swims. “Having Lyme, my immune system is next to nothing. You can imagine what one swim will do to your body, let alone 4 in a row. After day one, I was feeling flu-like symptoms and went and bought an over-the-counter medication called Oscillococcinum to alleviate the symptoms. It helped. Mentally, it was tough to get through the first two swims and make it to Apache, the 17-miler on day 3. I was really struggling with that. Originally my goal was to just do Apache since it was the longest of the swims, but then I thought the real challenge is to do them all back to back to back to back.”

He accepted the challenge and pushed his body further than he has ever before:

He impressed race director Kent Nicholas and his fellow swimmers at S.C.A.R., the most accomplished group of marathon swimmers this side of the Manhattan Island Marathon Swim. “After the [17-mile] Apache swim some of the more accomplished swimmers said that I am now ready for the Catalina Channel. I would love to give Catalina a shot. Maui Channel is one channel that I have always wanted to do too. Kent has encouraged me to do S.C.A.R. and I’m glad I did.“

A documentary called “Under Our Skin” that explains Lyme disease is below.