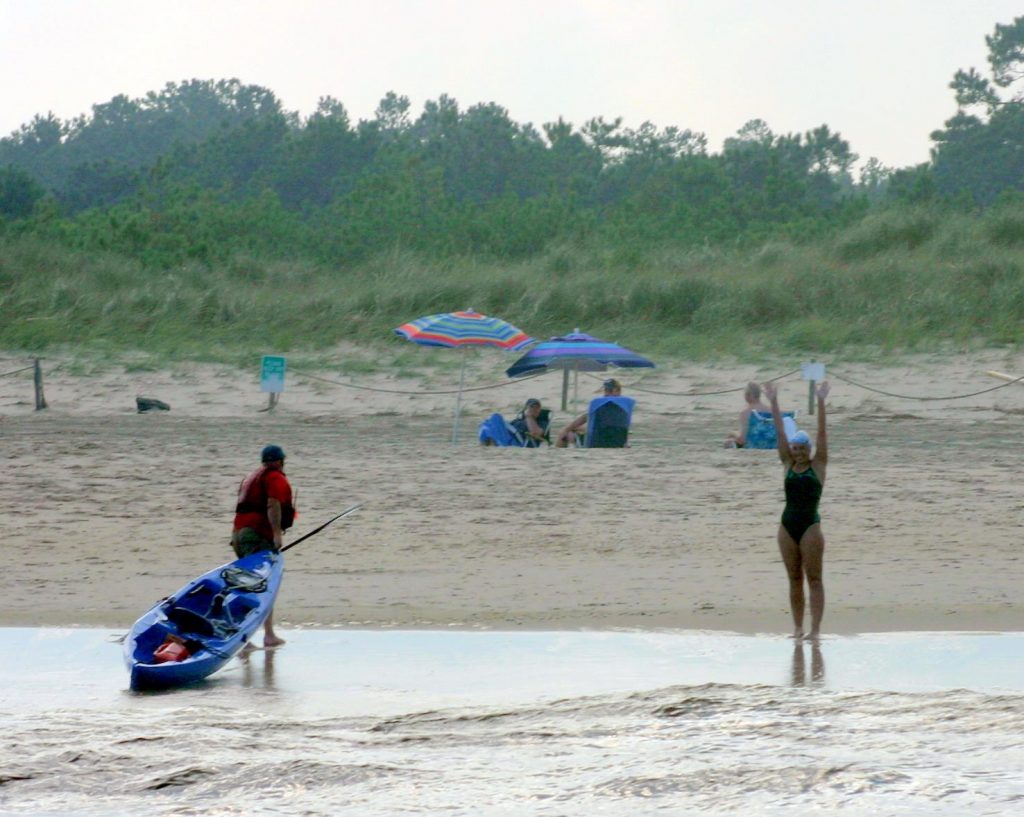 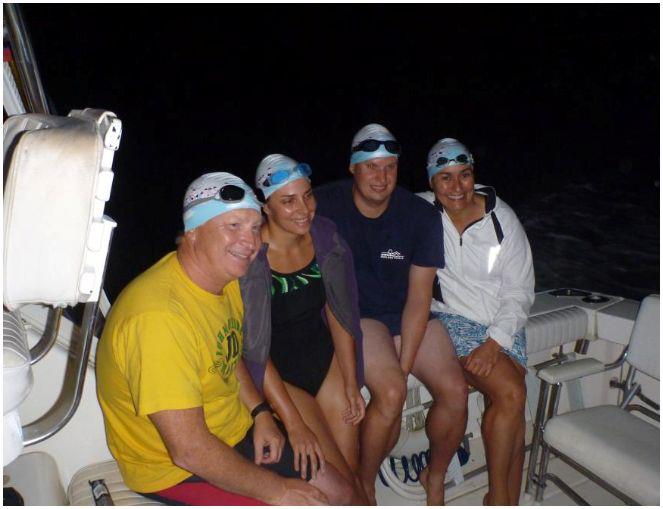 Lelané started with the three others and was the first to overcome strong oncoming currents.

“I encountered the same currents, but got pushed down to Ocean City, Maryland before retiring shortly after 10:30 when I got the radio call that Lelané made landfall. I swam more than 19 miles, but got pushed 8 miles down from the closest landfall and was making no headway when the tides turned and figured it would be better to call the swim rather than making everyone wait for several more hours,” explained Jason.

Jason provided some history of this bay based on a story in the Philadelphia Inquirer newspaper on June 26th, 1912:

At daybreak next Sunday, Charles R. Durborow, a 29-year-old Philadelphia bank clerk, recognized by the London Times as one of the world’s best long-distance swimmers, will attempt the hardest swim in the world by trying to cross the Delaware Bay from Cape May to Cape Henlopen, which on account of the strong currents, will be equal to 40 miles in still water.

This feat will require anywhere from 10 to 15 hours to accomplish. Captain F. R. Brewer of the Lewes Maritime Exchange, in a letter to Durborow has told him that “from all he has found out from those who claim to know all about it” the swim cannot be made on account of the swift tide in and out of the bay, but others say “if you can hold out long enough, start at half ebb tide, somewhere above Swell’s Point, to avoid the Cape May Shoals, you might make it.” The big bank clerk, who has been training all week at Atlantic City, says he has never been in better condition, but admits “he is only human and may not be able to battle the elements.” Durborow will be accompanied by Dr. J. K. Shell to look out for his physical condition, Billy Curwen, his coach, Captain Edward Burke, Atlantic Life Guard, will act as his pilot, James H. Sterrett of the Sporting Writers Association will be official reporter. Bankers Dave Carson of Central Trust, Ben Cloud of Philadelphia National and N. G. Wood of Provident Trust, and other admirers will make up the party who will follow the swimmer in a large power launch.

Apparently, Durborow succeeded in his attempt because it is mentioned a year later, on August 4th 1913 by the Boston Journal, when it reported that Durborow was giving up long-distance swimming:

Charles Durborow of the Philadelphia Swimming club, admitted by experts to be the greatest long-distance swimmer ever developed in the country, will seek no more laurels in grueling tests of aquatic endurance. He has had a brilliant career and no one has equaled his splendid performances. World swimming judges maintain that his Delaware Bay swim of 1912 — when he covered a shade under 20 miles, across tide, from Cape May, N.J., to Cape Henlopen, Del., in 14 hours and 13 minutes using the trudgen stroke all the way — stands out as the greatest bit of swimming ever done by man.

When Paul Timmons swam across this stretch of water in July 2006, he swam in a wetsuit from Cape May Point to Cape Henlopen. Lelané, swimming as a traditionalist as can be expected of a South African marathon swimmer, started from a point north of Cape May at Higbee Beach and landed south of Cape Henlopen in Rehobeth Beach.

Lelané explained what she went through on her unprecedented swim, “My shoulders and elbows were killing me at one point but after realizing that the pain was there but not getting worse I just pushed ahead. I got stung about twice by some jellyfish but the sting far less than what I was already feeling.”

Her swim route is here.