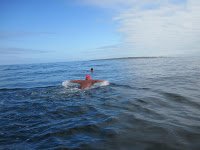 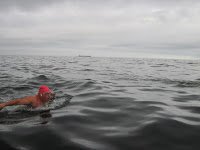 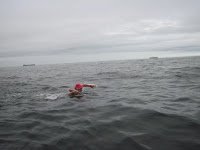 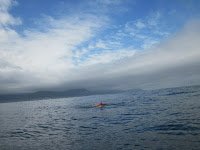 The swim on one of the toughest butterfly courses in the world was ratified by the Cape Long Distance Swim Association. Freestyling through cold water with apex predators around, combined with large ocean swells and wind-whipped turbulence are enough of a challenge, let alone doing it butterfly.

Brenton Williams took on the challenge this Monday in 12ºC (53.6ºF) water and bumpy seas across the 11.5 km channel course (note: the Robben Island to Blouberg Beach route is 7.6 km). Another South African swimmer, Chris Barnard, completed the Blouberg course in February 1990. 22 years after that first fly crossing, Peter Bales, chairman of the Cape Long Distance Swim Association, said that he never thought he would see another butterfly swimmer taking on Robben Island. “Chris Barnard was a phenomenal swimmer. I really never thought I would see somebody else try to fly the Robben Island crossing. Brenton’s swim was an epic.”

“I was in Cape Town for the 5 km Shipwreck swim which was held in 11ºC water along the Blouberg coastline on Sunday. Derrick Frazer made the call that there was a window for a Robben Island crossing early Monday morning. Although conditions were not ideal, I felt that we had to make use of the opportunity at the 11.5 km crossing,” recalled Williams.

After I had settled down, I realised it was going to be a hard swim as my shoulders were still stiff from the Shipwreck swim the previous day where we swam through patches of water that were around 10ºC. The last 3K was really tough. I had to dig deep to keep the rhythm going. The Island just didn’t seem to be getting any closer. When it looked like we were really close to shore, we discovered there was a huge kelp bed that we had to swim though to reach the Island. It was hard swimming fly through the kelp. It took about 20 minutes to swim the last couple of hundred meters.”

The deeply-felt emotions of swimming to Robben Island got to the hardened butterflyer. “Getting close to the finish was a really special moment in my life as Robben Island has played a significant role in South Africa’s history and to complete a swim was a great feeling. Things seem to go in slow motion and the sea calmed down close to the shore.”

And to close the circle, Chris Barnard who inspired Brenton to start swimming butterfly in the open water was at the beach to congratulate Williams when he returned from Robben Island. “Brenton had a really good swim. It was not the best of conditions and the water was cold.”

But all left with a warm feeling about the first-time achievement.