Brian Leftwich Swims And Runs To The Limit 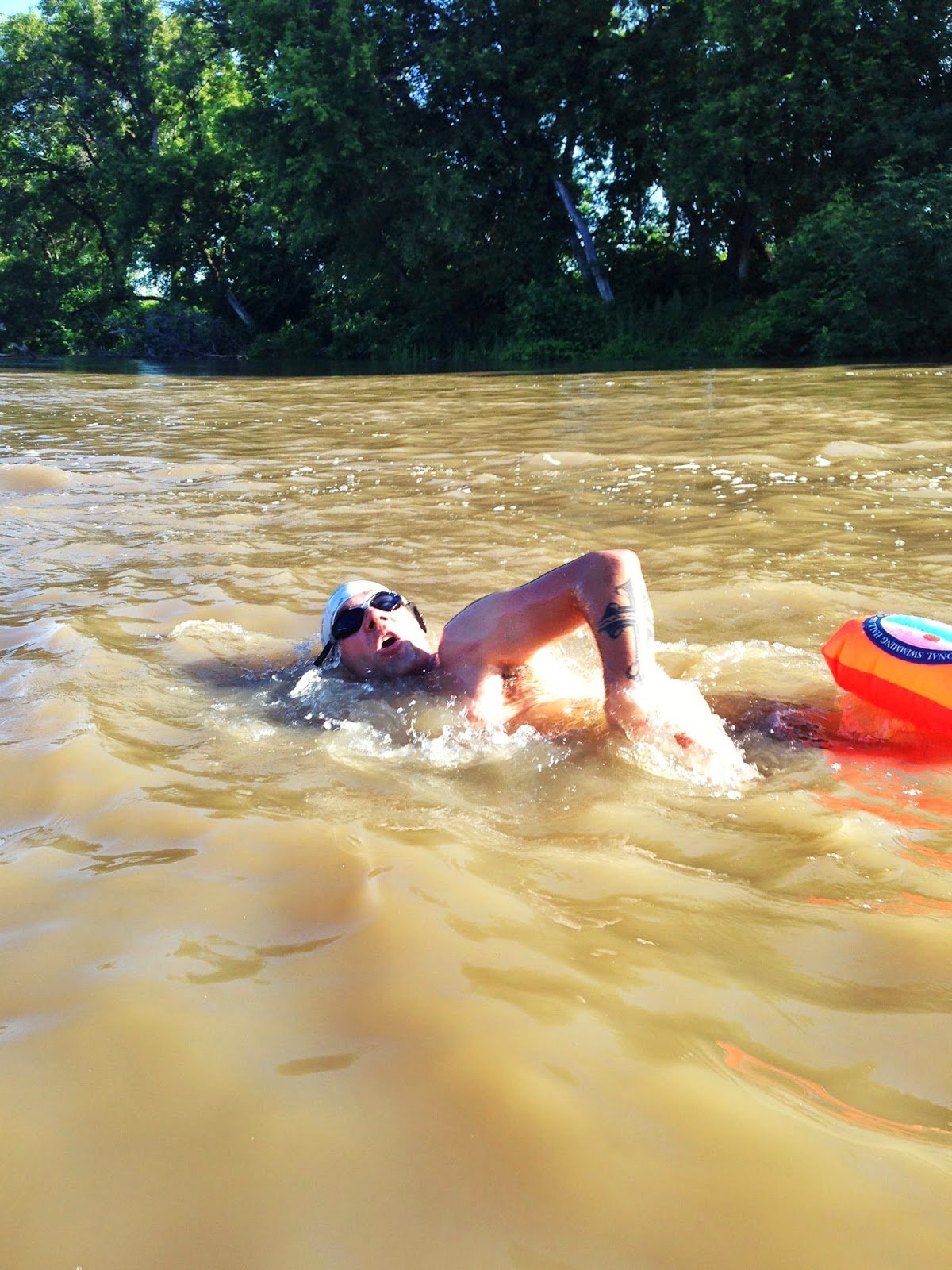 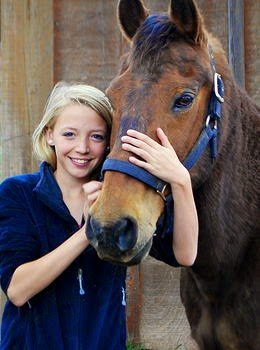 After last week’s 36-mile (57.9 km) END-WET swim from North Dakota to Minnesota down the Red River of the North, 32-year-old Brian Leftwich got out of the water after swimming for 9 hours 57 minutes, changed into his running gear, and then ran 29 miles to raise money for the Make A Wish Foundation. After an early morning start for the END-WET the day before, Leftwich finished at 2 am and then attended the award ceremony.

The 32-year-old from Bismarck, North Dakota, who moved to Fort Collins, Colorado in 2001, works for the state of Colorado in Disaster Response and Volunteer Management. He is also a volunteer Firefighter and EMT with the Eaton Fire Department, currently chasing a dream of becoming a full-time firefighter.

But he also trained like never before for his unique endurance charity swim-run that he performed on behalf of Team Lily [shown on left] and explains below:

Daily News of Open Water Swimming: Do you see yourself as a swimmer or a runner or an all-round endurance/adventure athlete?

Brian Leftwich: Honestly, I’m just a guy missing a “quit switch.” I love endurance events and pushing myself to the limit. Mainly just to prove that I can do it and hopefully inspire others to give it a go. I really am just a clydesdale hoping to finish with a smile.

Daily News of Open Water Swimming: Can you explain your swimming and running adventure around the END-WET 2014?

Brian Leftwich: I swam 36 miles as part of the END-WET race in Grand Forks, North Dakota. My brother Kyle kayaked as my support. The race was phenomenal. With the river at flood stage, it was a wild ride. Navigating around debris and tracking the current made it interesting. The water was colder than expected and towards the end of the swim I could tell my body temperature was getting low towards the end. I had my brother phone ahead for broth and noodles so I could warm up. My nutrition was all liquid, with Hammer Strength Perpetuem, HEED and gels being my main source. I was the 15th person out of the water and with an official time of 9 hours 57 minutes.

The run was something we dreamed up as part of the 65 Rhinos campaign. We wanted the mileage to add up to 65, so we choose 29 miles for the run and set up a course along the greenway. Originally it was to be three figure 8 loops, with each loop of being 4 miles and 4.7 miles to form the figure 8. I would then do an extra half-loop of 4 miles to reach 29.

We began the run around 7:30 due to a thunderstorm that swept in. My brother who kayaked and was attempting his first half marathon, paced me for the first 13 miles. I felt pretty dehydrated for the first half and we paced at 11:00 miles. I realized after the first full figure 8, that I did not want to continue running the 4.7-mile portion of the course. So we made the decision to run 5 laps of the 4-mile loop after I had completed the first 8.7. After the first 13, I high-fived my brother on his first half and then my race director came out to pace me for the rest of the run. I took the next lap, mile 13-17, to get my nutrition dialed in and try to rehydrate in the humidity. My pace was around 13:30. We did another miles after that at a 12:30 pace and my body was starting to even out a bit. I was taking SaltStick/ caffeine pills and downing Hammer Strength Perpetuem to stay ahead of sleep. Apparently I wandered off the path a couple times. We hit 21 miles and I knew that I needed to switch up the course a bit. I was in my dark place and struggling to stay awake. We decided to do a quick mile out and a mile back from the aid station to get my total up to 23 miles and just break it up a bit. I sent my brother to the house we were staying at and told him we would run to the house and meet him. The house was 5.5 miles away. Mentally, I needed a destination to get motivated. It was 12:40 am when we set off for the house. We settled into a 12:00-minute pace and made our way through town. We reached the house around 1:50 and I realized I still needed 0.5 miles to hit 29. I ended up running 3 laps up and down my friend’s street. It was pretty hilarious. Finally at 2:00 AM, my watch read 29.1 Miles. We were done. 29 miles, 6:30.

Daily News of Open Water Swimming: What was difficult about your adventure?

Brian Leftwich: Training was tough. Early on, I developed a nasty case of plantar fasciitis and running was difficult for me. I live in Colorado, so the only place I could really train was a swimming pool. My longest swim was a little over 9 hours. I hit 27 km. I also had some pretty awful chlorine inhalation and couldn’t take a full breath for a few hours afterwards. The other part was not hydrating enough after the swim. I didn’t realize how much the humidity would affect me, but I played catch up the entire run trying to stay hydrated.

Daily News of Open Water Swimming: What was enjoyable about your adventure?

Brian Leftwich: Seeing my family when I came out of the water. Watching my brother finish his first half marathon was a highlight. Birthday Cake Oreos. The swim and the swimmers were amazing. Andy Magness and his team put on a great event. Raising money for Make-A-Wish made it all worth it. We raised US$3000 to help make wishes come true. I was also able to honor my friend Johnathan Skinner who passed away in January from Cystic Fibrosis. He was truly the catalyst for 65 Rhinos.

Daily News of Open Water Swimming: What is your athletic background?

Brian Leftwich: I grew up playing hockey. I never really liked running all that much. In 2010 I had become incredibly unhealthy, was a pack-a-day smoker and weighed 260 pounds. I walked into an MMA gym one day and decided to make a change. I began training Brazilian Jiu Jitsu and Muay Thai at Zingano’s in Broomfield, Colorado. I fell in love with it and competed in both disciplines. I was also introduced to CrossFit at the same time and began to do that 3-4 days a week. Eventually, I became a L1 trainer and coached at a local gym. I ran my first half marathon in 2012. Sub-2:00 which was my goal. In April 2013, I moved to Washington D.C. for a job and hooked up with a group called Team Red White and Blue. They encouraged me to keep running and training. I completed 2 ultra marathons and an Olympic Distance Triathlon. My ultras were a 30-mile trail run in Illinois and Fire On the Mountain 50 km Trail Run in Maryland. The triathlon was the first time I had swum in 20 years. I fell in love with the water and kept swimming when I wasn’t running.

Daily News of Open Water Swimming: Do you have a website?

Brian Leftwich: www.65Rhinos.org. I am still updating the week of the race on the blog, but it should give you a pretty good idea of why I did it.

65 Rhinos chases wishes for children with Cystic Fibrosis through creative fundraising and athletic events. Leftwich completed the END-WET swim and run on behalf of Team Lily (shown above).