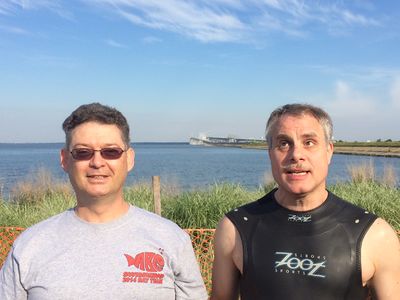 “I couldn’t see anything when my goggles filled up [with water].”

“The waves were so big and the sun was in my eyes, I couldn’t barely see a thing.”

But in Mark Rew‘s case, he is. As in totally blind.

Brian Suddeth serves as his coach and swim angel.

“I want to see Mark Rew succeed in his goal to complete a 2-mile open water swim. Mark approached me about 2 and a half years ago during his 25th wedding anniversary party to say his family had told him he’d never be able to swim a mile in open water. We met in college, and he’s been blind since his teens.

I’ve never known him to accept a limitation or turn back from a challenge. He’s one of the most capable people I know so we went to the pool to see where he was
.”

Michael Phelps, he was not. Splashing and bouncing off the lane markers with a kick and pull that took him 2 minutes for 25 yards.

“I had to tell Mark that he couldn’t do this unless he wanted to completely commit. He did. I picked the brain of my mentor Terry Laughlin to find ways to communicate to Mark the basics of the much more relaxed and streamlined Total Immersion swimming style that I’d learned. It was a huge challenge for me as most of the usual swim training is very visual ‘do as I do’ with lots of available videos.

I had to work out new drills and new methods to convey a very visual set of movements and body positions to someone with little frame of reference
.”

Six months later, Rew completed the One Mile Challenge at the annual Great Chesapeake Bay Swim, swimming side-by-side with Suddeth as an untethered swimmer with Peggy Connor as his kayaker.

He was the first blind person to complete the Great Chesapeake Bay Swim. “But even in succeeding, Mark wasn’t satisfied because we finished last. Last year, we repeated the event after another year of training together. This time he finished almost 9 minutes faster and roughly in the lower middle of the pack.”

This year, Suddeth and Rew are upping the ante to 2 miles as Suddeth explains his methodology. “When we swim, it’s always untethered. I swim beside him to ‘bump’ him onto the right course. We’re about to join the Arundle Breakfast Club Masters group for some river swims to warm up.”

Suddeth is also helping another low-vision friend Deena Lambert in her goal of completing a sprint triathlon with an open water swim. “We met after Mark and I started training together. I’d registered with several groups that link disabled athletes with appropriate guides. Deena found my name through one of them. As she was motivated for success, I agreed to start training with her as well.”

Deena is a NASA tech who is also a cyclist and runner. But like many triathletes, her biggest challenge was the swim. She has some sight and can at least see the black line in the pool. “She worked diligently with me, benefitting from some of the new drills and methods I developed with Mark. We plan to do some river training with Arundle Breakfast Club, then have our sights set on a sprint triathlete on the Eastern shore of Maryland in October.

As for himself, Suddeth will pick either a 2-mile or 5 km swim to attempt in butterfly stroke. “I’ve been learning from the amazing Vicki Keith from Canada and even had a training swim with Dan Projansky. Even though I’ve only been swimming for 9 years and open water butterfly for 5 years, I’m privileged to have been encouraged and helped by masters in this sport.”