Bringing The Dead Sea Back To Life 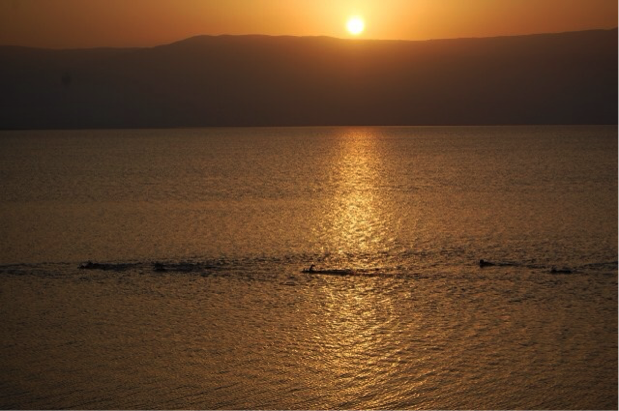 The Tribord Snorkeling Surface Mask Easybreath® is a snorkeling mask for surface snorkeling that enables user to see and breathe underwater similar to dryland (see here).

Ori Sela and his team are also using the Easybreath® to train for and attempt the 18 km Dead Sea Swim in the Dead Sea to prevent salt mouth.

Easybreath® has a wide field of vision, enables easy breathing for natural breathing through the nose and mouth, and is anti-fogging especially in waters over 18°C – and 18 km in distance.

Sela and his teammates are swimming across the Dead Sea with the collaboration of EcoPeace Middle East, an organization that brings together Jordanian, Palestinian, and Israeli environmentalists. Their primary objective is the promotion of cooperative efforts to protect their shared environmental heritage. In so doing, they seek to advance both sustainable regional development and the creation of necessary conditions for lasting peace in Middle East. EcoPeace has offices in Amman, Bethlehem, and Tel-Aviv (see here).

Sela explains why the Dead Sea is selected for their swim. “The Dead Sea is a masterwork of nature in all aspects: geological, ecological, historical. It is the lowest place on earth and one of the saltiest bodies of water. Its scenery is like nowhere else on earth, a place of relaxation for body and soul and a magical place that draws tourists of all kinds: religious, hikers, scientists, nature lovers, and cure seekers due to its well-known therapeutic virtues.

Three major faiths arose along its shores and thus it has a spiritual importance to humanity where three communities share this stretch of land: the Jordanians, Israelis and Palestinians.

But the Dead Sea is dying.

The Dead Sea water level has fallen more than 25 meters during the past 30 years due to irresponsible and conflict-ridden water-grabbing and unsustainable water management. We’ve gathered to express our gratitude and help in efforts to bring it back to life

The 18 km crossing will draw attention to the enactment of a Law of the Dead Sea by which it will regain 800 million cubic meters of water per year. “This will halt the continued deterioration of its poor situation,” explains Sela. “The purpose of our swim is raise awareness and understanding of the condition of the Sea and its surroundings and initiate a regional process of legislation, implementation and enforcement.

We came to the sad realization that we are probably the last generation that can stop the destruction of the Dead Sea and its surroundings and thus we are obliged to act immediately and in the best manner in which we can express ourselves [as swimmers]
.”

For more information on the Dead Sea Swim on April 2016, visit the Salty Swim here.