Brooke Bennett To Make A Splash In Tampa Bay 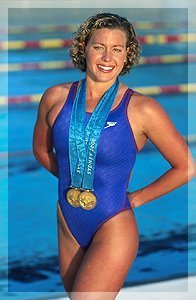 Far away from the tides of the English Channel and the Strait of Gibraltar, removed from the ocean swells of the Molokai Channel and Catalina Channel, distant from the cold water of the Cook Strait and North Channel, different from Windermere and Zurich, the Tampa Bay Marathon Swim remains a challenge for intrepid marathon swimmers.

And this now includes 3-time Olympic gold medalist Brooke Bennett who is expected to lead a strong field that will swim the entire length of Tampa Bay on April 20th at the 16th annual 24-mile Tampa Bay Marathon Swim. Starting at the Sunshine Skyway Bridge and ending on the Courtney Campbell Causeway in Tampa, the race is held annually to celebrate Earth Day and the revitalization of Florida’s largest estuary.

“When Grant Hackett and Ous Mellouli entered the global community of open water swimming, it created a quite a stir,” said Steven Munatones, founder of the World Open Water Swimming Association.

“The participation of these Olympic gold medalists highlight the increasing athleticism at the elite levels of our sport. Year by year, the level of intensity in long distance training and the speed at which the elite athletes race are increasing. This improvement in speed, stamina and strength is seen at all levels of the sport.

Now Brooke is training hard and showing her former speed that brought her 14 national titles and 3 Olympic gold medals. Brooke is demonstrating the similar confidence of her illustrious past by entering this year’s Tampa Bay Marathon Swim. Her willingness to push through 24 miles swimming the length of Tampa Bay shows a degree of seriousness that will serve notice at the elite echelon of marathon swimmers. It is great to see Brooke healthy and unhampered as she was towards the end of her pool career by shoulder problems. Other 30-year-olds have proven themselves capable of being competitive and I am sure Brooke will be too.” The Tampa Bay Marathon Swim has been recognized as one of the 30 World Swimming Majors races and is a fixture on the world’s ultra-marathon swimming circuit. “The swim can be rough and tough, foggy and warm, where the unexpected can be expected,” added Munatones. “The World Open Water Swimming Association wishes the swimmers and the race organization best wishes for a successful 2013 edition.” Since this event was first staged in 1998, it has drawn competitors from across the United States, Great Britain, Guatemala, Italy, Australia, Japan, Argentina, Dominican Republic, Germany, India, Canada, and the Cayman Islands. Below are the 19 solo swimmers and 3 relay teams that have entered the event under the direction of founder Ron Collins.

The relays include the following teams: