Brotherly Advice Pays Off For The Grimsey’s 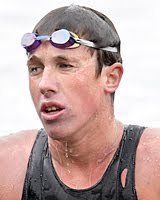 Although they will not be going to London to represent Australia in the Olympic 10K Marathon Swim, Codie and Trent Grimsey will be traveling together to represent their homeland in the 5K at the 2011 World Swimming Championships.

Codie (56:32) and Trent (56:43) were the first two Australians over the line in the Australian 5K Championships behind overall winner Kane Radford of New Zealand (shown on left) who won in 56:30.

“Trent and I have always spoken about being on a national team together, but to actually have it happen today is a dream come true,” said the younger Codie. “I was actually talking to him as we were going around the first buoy on the second lap and he told me where to position myself for the next lap and I guess it paid off. He’s a great big brother to have.”

Trent, one of the three Grimsey brothers in the race, reflected upon the race as the stalwart older brother, “I hate getting beaten at anything, but if I had to choose someone to beat me it would definitely be Codie.”

In the women’s field, youth was well-served when 15-year-old Bonnie MacDonald won in 59:18 over Danielle DeFrancesco (59:21) and New Zealander Cara Baker (1:00:49). “I really tried to be out on my own this year and not be conventional and race in a pack, just like [Olympian and 10K winner] Mel (Gorman) did yesterday.”

With a national team buoyed by experience with Ky Hurst, Melissa Gorman and Trent Grimsey, mixed with the wild-eye ambition of youth, the Australian national team looks to be a force in both Shanghai in 2011 and London in 2012. “I’m really happy with the blend of youth and experience that we have heading to Shanghai,” said head coach Greg Towle to the assembled Aussie press. “Having two Olympians who have been there and done that will be great for not only them, but the entire team.

The New Zealand team with Kane Radford winning and Cara Baker proving herself in both the 5K and 10K races was similarly buoyed with enthusiasm. Swimming New Zealand Open Water manager Phillip Rush said, “Cara wanted to make sure she qualified for Shanghai and probably swam within herself today. I really believe, if she puts in the hard work in the next couple of months, that she has the potential to finish in the top 10 at the world championships.”

The top 10 results for the men and women: