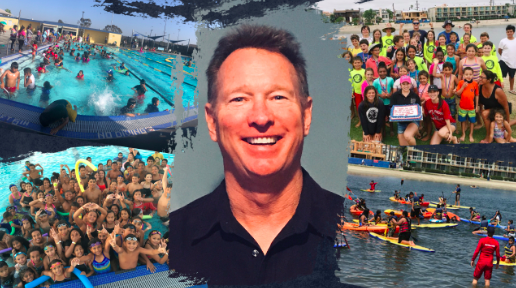 Greg ‘Buc’ Buchanan played water polo at the University of California San Diego Water in the early 1980s. His coach Denny Harper recalled the northern California native, “Buc was big and strong and fast, and I saw a lot of potential in him as a player and as a leader, even though I don’t think he saw that initially.”

He served as the co-captain of the 1982 water polo team when he was named a First Team All-American in 1982, the same year he worked part-time as a pool lifeguard. A year later, he started to work as a City of San Diego County beach lifeguard. “I was emotionally and physically drawn to not only helping people, but lifeguarding had a ton of variety.”

In working towards his master’s degree, he created a strategic plan for the San Diego Junior Lifeguard Foundation that focused on teaching kids how to swim, supporting Junior Lifeguards, and building a new Junior Lifeguard headquarters. He continued beach lifeguarding until 2014, but he found his role and mission in life early in his career.

In 2015, the Foundation changed its name to the Prevent Drowning Foundation. It offers free swimming and aquatic safety lessons to schools in underprivileged parts of San Diego and awards Junior Lifeguard scholarships to those who apply and meet certain criteria.

Buchanan explained his reasoning, “I’ve seen enough rescues that I wanted to find a way to give hope to kids so they could experience a lot of what I had experienced.”

For more information on the Prevent Drowning Foundation, visit here.