Buckets In The Open Water

Jordan Waxman, a private banker from New York, has devised his own portable feeding station that floats as it holds his feeding bottles, gels and extra goggles for use on all his open water training swims.

Jordan got the idea initially from Mike Tscantz-Hahn who just successfully crossed the English Channel in 2009. Jordan used his feeding station in San Francisco Bay’s Jordan Aquatic Park “one of the nicest places to swim with views of the Golden Gate Bridge, Alcatraz, Fisherman’s Wharf, Ghirardelli Square and the city skyline while you swim in a cool bay.” 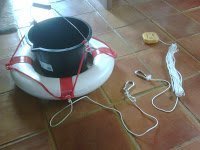 On the other side of the marathon swimming world, Colm Breathnach came up with a similar idea that he calls The Chuck Bucket (aka The Chucket). Colm and Alan Smith devised their own way to eliminate having to get out of the water to feed on marathon training swims. The Chucket can either be attached to a buoy or use a diving weight to hold it in position.

Colm advised marathon swimmers around the world, “It’s brilliant if you are doing laps, holding a dozen bottles, so a group of swimmers can use it. If you need more storage, use a bigger bucket or ring buoy.”

“Both the bucket and ring buoy float. You can adjust the tension and length of the ropes tying the bucket to the buoy in order to set the height of the bucket in the water. Because it’s out in the water, people are less likely to steal it or its contents, but you will get a lot of strange looks carrying it into the water.”

Strange looks or not, these creative home-made Chuckets do the job.