Cadiz Human Rights Day Swim Is Icing On The Cake 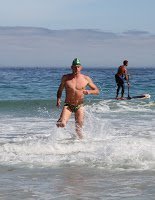 Danie, with a time of 29:09, said, “The water was ice cold. The race was hard and fast. I was up against some quick swimmers who kept up a blistering pace.

The last few hundred meters I sprinted, slightly pulling away from Phillip Emslie. My hands started going numb at the end from the cold but overall, it was an awesome swim for a great cause
.”

As part of the event, Cadiz contributed R10,000 (US$1,309 or €991) to Sisters Incorporated, a shelter for abused women and children in Cape Town. Event patron and veteran extreme swimmer Ram Barkai points out, “Unfortunately, domestic abuse is a real problem in our country.”

“It requires an increasing awareness and Human Rights day is the perfect day to raise this awareness.” Barkai said the turnout was phenomenal. “We had swimmers from all walks of life, including some development swimmers taking part and some top names in open water swimming. We pay tribute to these extreme swimmers for showing their support for human rights by entering this race and we salute Sisters Incorporated for the inspirational work they do.”